Modern Irish poems were highlighted in the recent announcement of the winners of the 2012 Times Stephen Spender Prize for translation of poetry. Two of the winners in the Open Award section have connections to Modern Irish Language courses taught in the Department of Anglo-Saxon, Norse and Celtic—courses which have been supported by a generous grant from the Irish government since 2006.

Comhghairdeachas (congratulations) to Dr Kaarino Hollo, lecturer in Irish at Sheffield University, who was awarded first prize for her translation of the beautiful Irish poem Marbhghin 1943: Glaoch ar Liombó ('Stillborn 1943: Calling Limbo'), by Derry O'Sullivan, an Irish poet born in Rochestown, Co. Cork, in 1944. Dr Hollo taught Modern Irish courses in the Department of Anglo-Saxon, Norse and Celtic from 2006-08. Her translation of the poem, with comments, can be read here. Hollo received the prize in London on 13 November, and her achievement and long interest in Irish language and literature are featured in the Guardian.

Comhghairdeachas also to Modern Irish language student Seán Hewitt, who was awarded a commendation in the 2012 Times Stephen Spender Prize, open, for his translation of Brendan Behan's Jackeen ag caoineadh na mBlascaod ‘A Jackeen Keens for the Blasket Island’. Behan, a Dubliner who learned Irish, is chiefly remembered for his works in English, but Seán gives a fresh voice to Behan's Irish poem on the remote Blasket Island, An Bhlascaod Mhór, located off the coast of the Dingle Peninsula in Co. Kerry. As Hewitt observes, ‘this poem shows a gentle longing for an Ireland wildly unlike the poet's own, one removed from him not simply geographically, but also culturally and linguistically.’ The poem was written just five years before the last Blasket islanders—Irish speakers who preserved a wealth of traditional lore and verse—were evacuated from the island in 1953. 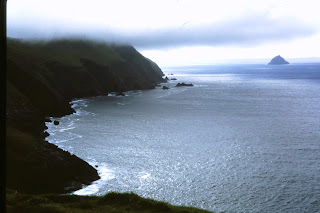 Seán Hewitt, who is affectionately known among Cambridge University students in the Modern Irish classes by the leasainm (nickname) ‘Seán Ard’, excelled in Modern Irish classes taught in the ASNC Department (2010-2012), earned a certificate in the Teastas Eorpach na Gaeilge examination at the University of Maynooth, and graduated in June 2012 with a first in English (with several papers in Irish literature). During the ASNC celebration of Seachtain na Gaeilge, an international festival of Irish culture, he delivered memorable recitations of poems by the modern poet Seán Ó Riordáin, and the love song Máire Ní Eidhin by ‘Raifteirí’, the blind poet alluded to in W.B. Yeats's 'The Tower'. In 2011 he was awarded a H. M. Chadwick Scholarship to study of Modern Irish in the West Kerry Gaeltacht. Hewitt’s personal experience of the language and landscape is poignantly conveyed in his translation of Behan’s poem. Hewitt writes: ‘Last summer I had the privilege of continuing my study of Irish in West Kerry, thanks to a generous grant, and my visit to the Blaskets was truly haunting – I will never forget the slow backbone of land rising out of the sea-mist, the cormorants skimming the water and, most incredibly, the sheer, devastating silence. It is this silence that the poem conveys so well.’

Brendan Behan
Reproduced by kind permission of The Gallery Press

A Jackeen Keens for the Blasket

Sunset, and the wide sea will be laid out like glass,
no sailing boats or signs of life, just a last
eagle that glints on the world's edge, separate,
circling over the lonely, spent Blasket...

The sun sunk down, and nightshadows scattered
over the high moon, herself scaling
the ground with bare, outstretched fingers, cold
on the broken houses, the life's scaffold...

All silent but the birds' bellies sliding
over the waves, glad to be home, head tucked
snug in breast, the wind's breath rocking the door,
and the damp hearth, fireless, heatless, unwatched.

Translated from the Irish by Seán Hewitt 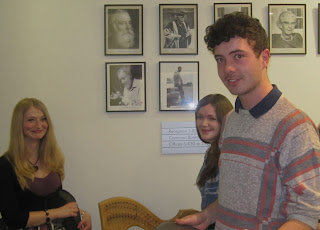 For Seán Hewitt’s full commentary, see here. The Stephen Spender Trust supports the translation of poetry from any language, classical or modern, into English. Students are encouraged to submit translations of verse for the 2013 competition, which opens on 11 January, 2013. The deadline for the 2013 prize will be Friday 24 May. Details and entry forms will be available on this website.
Posted by Anglo-Saxon, Norse, and Celtic at 11:30