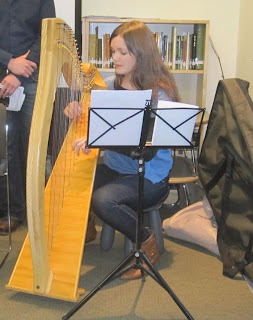 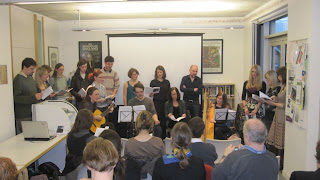 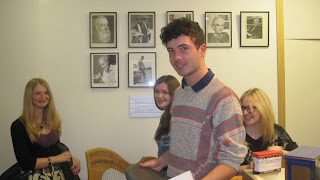 Students of Modern Irish in the University of Cambridge (in front of portraits of some of our illustrious Elrington & Bosworth Professors of Anglo-Saxon)
Posted by Anglo-Saxon, Norse, and Celtic at 09:13 5 comments:

Dr Elizabeth Ashman Rowe reports:
The Viking Society for Northern Research was founded in 1892 and is now a professional organisation for scholars and researchers in the fields of Viking Age Scandinavia and Old Norse literature. In addition to offering public lectures and publishing a scholarly journal and monographs, the Viking Society organises a conference every spring with a student audience in mind.This year, ASNC was the host department, and on 12 February Dr Elizabeth Ashman Rowe and Dr Judy Quinn held the conference on the theme of 'The Material Past: Understanding the Old Norse World'. The speakers were all top-level researcher in fields such as archaeology, history of religion, and Viking Studies, and they were asked to discuss an Old Norse text of their choosing in the light of their non-literary research. An overflow crowd of undergraduate and graduate students from across the UK and from as far afield as Norway filled Sidgwick Hall at Newnham College, and all agreed that it was a marvellous opportunity to learn about interdisciplinary approaches to Viking and Old Norse Studies and to ask questions of the experts.Stefan Brink of the University of Aberdeen began by investigating whether we could rely on the sagas' information about slaves and slavery, and Christina Lee of the University of Nottingham followed by asking whether sagas tell us anything useful about the status of the physically different. Adolf Friðriksson of the Institute of Archaeology of Iceland continued the theme of bodies by discussing death and burial in sagas and archaeology. After lunch, the topic turned from bodies to objects. John Hines of the University of Cardiff discussed poems and sagas that mention houses and artefacts decorated with mythological scenes, and Judith Jesch of the University of Nottingham showed how the references to Viking weapons in skaldic verse corresponded closely to actual weapons that have been found. Lesley Abrams of Oxford University concluded the talks with a survey of runic inscriptions on stone in Britain and Ireland that might provide evidence of the religious beliefs of the Scandinavian settlers in those places. In a final discussion, the speakers asked each other questions about their presentations, and the audience was fascinated to see the experts debate the topics among themselves in a very lively fashion.To find out what else the Viking Society offers, check out its website.
Posted by Anglo-Saxon, Norse, and Celtic at 04:50 2 comments:

Seachtain na Gaeilge, 20115 - 17 MARCHAs part of the celebration of 'Seachtain na Gaeilge', a two-week festival which promotes Irish language and culture in Ireland and abroad, the Department of Anglo-Saxon, Norse & Celtic will host the following events in the English Faculty Building, Sidgwick Site, 9 West Road.9 MARCH (Wednesday), 5pm, English Faculty Board RoomDr. Tim Robinson, Parnell FellowThe 'Geophanic' Language of Ireland: A Discussion on the Value of Irish PlacenamesTim Robinson, author of several books on the landscape of Connemara and the Aran Islands and creator of beautifully detailed maps, will consider the importance of place in Ireland and the consequences of the loss of place in the modern world. All are invited to come and examine Dr. Robinson's maps of Connemara and participate in an informal discussion on the value of place--a topic thoughtfully probed by Robinson in hisrecent Parnell lecture.


10 MARCH (Thursday), 5pm, ASNC Common RoomDánta agus Ceol/ Poems and MusicIrish Film: 'KINGS'A group of students from Modern Irish language courses will read selected Irish poems, perform traditional music and present a photographic travel account of the Irish landscape.Student performances will be followed by a showing of 'KINGS', an Irish language film (with subtitles) and winner of five Irish Academy Awards. The film explores the lives of six men who left their homes in Connemara in 1977 with hopes of a better life in England. 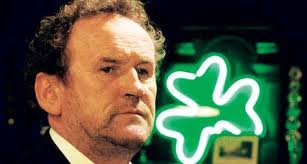 Colm Meaney in Kings (image from Alt Film Guide www.altfg.com)
17 MARCH: H. M. Chadwick Lecture, 5pm (G-R 06/ 07)Professor Wendy Davies (University College London) will present the annual H. M. Chadwick Memorial Lecture: Water mills and cattle standards: probing the economic comparison between Ireland and Spain in the early middle agesIrish Manuscripts:The Chadwick lecture will be preceded by a viewing of medieval Irish manuscripts at St. John's College. Places for the viewing are limited; to book please contact Denis Casey (dc399@cam.ac.uk).These events will be followed by refreshments. All are welcome to attend.
Posted by Anglo-Saxon, Norse, and Celtic at 06:55 No comments:

Henry Sweet Society for the History of Linguistic Ideas - Programme

‘A Land without Shortcuts’ — 2011 Parnell Lecture in Irish Studies

‘What makes a place out of a locality?’ was one of the many thought-provoking questions posed by Dr Tim Robinson, 2010–11 Parnell Fellow in Irish Studies, in his masterful 2011 Parnell Lecture, delivered at Magdalene College, Cambridge, yesterday. 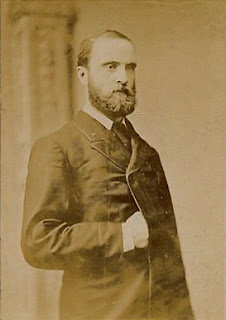 Charles Stewart Parnell (image from www.nndb.com)
Named for Charles Stewart Parnell, the ‘Great Adulterer’ and Magdalene College dropout still beloved of the Irish people, the Parnell Fellowship and Annual Lecture have provided forums for some of the most talented minds in Irish studies. This year the polymath Tim Robinson — author, mathematician, geologist, poet and cartographer (among other things) — skillfully expounded upon potential threats to the landscapes and seascapes of the Aran islands, Burren and Connemara; places on which he has become the greatest commentator and authority since J. M. Synge. His discussion of present day (and potential) adverse human impact upon these areas, both upon the physical environment and our perceptions of place, was set within an impressively large timeline stretching over geological and environmental eons. Questions from the audience, however, indicated that not everyone was in complete agreement with his assessment of modern human impact vis-à-vis that of previous generations and indeed natural forces of much longer duration. I came away feeling that while Robinson has not squared this circle, his answer to the above question, ‘it is the attention which we bring it’, is deserving of deeper reflection somewhere in the ‘long dark night of the intellect’ upon which he has previously written.
Posted by Anglo-Saxon, Norse, and Celtic at 07:12 No comments: