Dr Fiona Edmonds writes:
I am writing to tell you about the AHRC-funded project ‘Hagiography at the Frontiers: Jocelin of Furness and Insular Politics’ and the associated conference ‘Medieval Furness: Texts and Contexts’, which will take place on 8th July, 2011. I am the Co-investigator on the project; the other participants are Dr Clare Downham, (Principal Investigator) and Dr Ingrid Sperber (Research Associate). The project will run for two years, from July 2010 until July 2012.
The aims of the project are threefold: to bring forth editions and translations of two texts (Jocelin’s Lives of Patrick and Helena); to conduct research into the cultural context in which Jocelin was working; and to further knowledge of Jocelin’s work amongst the general public, particularly in Cumbria and North Lancashire. The writings of Jocelin of Furness have not attracted a great deal of scholarship, although there has been a resurgence of interest in his work recently, as witnessed by Dr Helen Birkett’s book The Saints’ Lives of Jocelin of Furness (Woodbridge: Boydell and Brewer, 2010). The study of Jocelin’s work has been made more difficult by the absence of satisfactory published editions of certain texts, notably the Life of St Patrick. Jocelin’s writings are, however, of great interest to scholars of twelfth-century and . 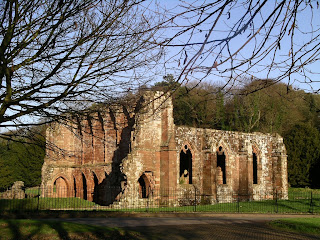 Furness Abbey (image from Wikimedia commons)
One of the most interesting features of Jocelin’s work is his interest in the Celtic world: Jocelin not only wrote a Life of Patrick, but also a Life of Kentigern (a North British saint and the patron of ) and a Life of St Helena, whose Brittonic origins were stressed by Jocelin. Jocelin also composed a Life of St Waltheof (d. 1159), who was abbot of in the Scottish Borders, a leading monastic reformer in northern and a stepson of the Scottish king David I. It is interesting to ponder the extent to which the location of Furness Abbey (pictured) facilitated Jocelin’s connections with, and interest in, the Celtic world. The Furness peninsula lay at the outer edge of the Anglo-Norman realm and Furness fell under Scottish rule for a time. The inhabitants of Furness were culturally and linguistically diverse and the location of the peninsula – protruding into the Irish Sea – facilitated contact with and the Isle of Man. My role in the project is to investigate the cultural and linguistic history of medieval Furness and to study Furness’s network of daughter houses, many of which were located in and
The project’s main themes will be explored in our day conference ‘Medieval Furness: Texts and Contexts’. The conference will take place at the Abbey House hotel, ; the programme is copied below. The conference is supported by the of and the Department of Anglo-Saxon, Norse, and Celtic, . Please contact Dr Fiona Edmonds to obtain further information and a booking form.
Programme:
9.00 Registration
9.30 Opening remarks: Keith Stringer ()
9.45 Janet Burton (, Trinity Saint David)
Furness, Savigny and the Cistercian World
10.15 Hugh Doherty ()
The twelfth-century benefactors and enemies of Furness Abbey
10.45 Tea/Coffee
11.15  John Reuben Davies ()
The Life of St Waldef, abbot of
11.45 Marie-Therese Flanagan (Queen’s University, )
The Life of St Patrick, patron saint of
12.15 Seán Duffy ( )
, and the Irish Sea Region in the age of Jocelin
12.45 Lunch
2.00 Helen Birkett ()
Jocelin and the literary legacy of Furness Abbey
2. 30 Jason Wood (Heritage Consultancy Services)
Furness Abbey: art, literature and tourism
3.00 Closing Remarks: Richard Sharpe ()
3.30 Visit to Furness Abbey
6pm Conference dinner
Posted by Anglo-Saxon, Norse, and Celtic at 09:13 No comments:

On Tuesday 6th December, Dr Mark Blackburn, keeper of coins and medals at the Fitzwilliam Museum and reader in the Department of Anglo-Saxon, Norse & Celtic, was interviewed for Radio 4's programme iPM. His discussion on coins, medals and how they reveal our history can be heard tomorrow (Saturday 11th December) at 5.30pm, and will be available on the BBC's iplayer facility thereafter.
Posted by Anglo-Saxon, Norse, and Celtic at 13:25 No comments:

Congratulations to Affiliated Lecturer in ASNC, Dr Peter Stokes, who teaches Palaeography in the department, and who has just been awarded a prestigious Starting Grant from the European Research Council for a project to develop a 'Digital Resource for Palaeography', based at the Centre for Computing in the Humanities, at King's College London. The details of the project can be found here.
Posted by Anglo-Saxon, Norse, and Celtic at 07:44 No comments:

CFP: Henry Sweet Society for the History of Linguistic Ideas

The next Spring Meeting of the Henry Sweet Society for the History of Linguistic Ideas will be held on Saturday 19 March 2011 at the . The Leslie Seiffert Lecture will be delivered by Professor Emeritus Richard Hudson of University College London.

Papers are invited on any topic within the History of Linguistics, and will typically be of 20 minutes’ duration with 10 minutes for discussion. All proposals, including title and abstract (maximum 250 words) should be sent either electronically or by post to the address below by 31 January 2011. Notification of acceptance of proposals will be made by 18 February 2011. 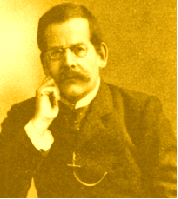 Booking forms will be available on the Henry Sweet Society website (http://www.henrysweet.org) from early January, and must be returned by
9 March 2011.

For abstract submissions and further information please contact:
Dr Deborah Hayden
Department of Anglo-Saxon, Norse and Celtic,
,
dah58@cam.ac.uk
The Henry Sweet Society for the History of Linguistic Ideas was founded in February 1984. Its aims are to promote and encourage the study of the history of all branches of linguistic thought, theoretical and applied, and including non-European traditions. Its fields of interest include the history both of the major subject areas of linguistics and also of more specialised topics, such as writing systems, literacy, rhetoric, and the application of linguistic ideas within professional and technical fields. It also publishes the biannual journal, Language and History.
Posted by Anglo-Saxon, Norse, and Celtic at 12:31 No comments:

This is a reminder that the 2010 E. C. Quiggin Memorial Lecture will take place today at 5pm in Room GR.06/07, English Faculty Building, 9 West Road, Cambridge.

Prof Liam Breatnach, School of Celtic Studies, Dublin Institute for Advanced Studies, will speak on: 'The early Irish law text senchas már and the question of its date'.

All welcome.
Posted by Anglo-Saxon, Norse, and Celtic at 03:05 No comments: