An obituary for Dr Mark Blackburn (1953-2011), prepared for the British Numismatic Journal, has been made available electronically in advance of its publication. It can be found here.

[Further edit: 30/09/11] Mark is also the lead obituary in today's Times (p. 64 of the paper edition; accessing the online edition of The Times requires a subscription).

As part of the 'Cambridge Ideas' series, learn more about Dr Emily Lethbridge's exploration of the landscapes of the Icelandic sagas ...

Elizabeth Boyle and Paul Russell, both of the Department of ASNC, have recently published a volume of essays on the life and scholarship of the Celtic scholar and colonial jurist, Whitley Stokes (1830-1909). The volume arises from the conference which took place in September 2009 to commemorate the centenary of Stokes' death. 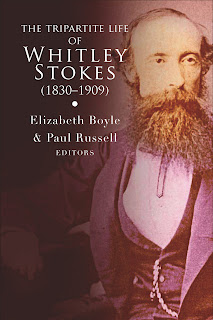 The wide-ranging volume includes essays on Stokes' pivotal contribution to the popularisation of Edward FitzGerald's translation of the Rubáiyát of Omar Khayyám; Stokes' friendships with the Pre-Raphaelites; an account of his legal career in India; and an assessment, by Ananya Jahanara Kabir, of Stokes' place within the phenomenon she calls 'imperial medievalism', namely the conjunction between scholarly interest in the European Middle Ages and Britain's imperial presence in India.
Of particular interest to Celtic scholars is Pól Ó Dochartaigh's chapter on Stokes' relationship with Rudolf Thomas Siegfried; Paul Russell's chapter on Stokes' collaborations with Henry Bradshaw; Pádraic Moran's chapter on Stokes and the native Irish linguistic tradition; Thomas Charles-Edwards on Stokes and medieval Irish law; and Aderik Blom on Stokes' scholarship on Continental Celtic.
The volume is published by the leading Irish academic publisher, Four Courts Press.
Posted by Anglo-Saxon, Norse, and Celtic at 02:07 2 comments:

It is with deep sadness that we report the death of Dr Mark Blackburn LittD., Keeper of Coins and Medals at the Fitzwilliam Museum and Reader in Numismatics and Monetary History in the Department; he died at home on 1 September 2011.
Posted by Anglo-Saxon, Norse, and Celtic at 02:27 1 comment: