In the early eighteenth century a manuscript of medieval Welsh law, formerly owned by William Philips (1663–1721), Recorder for the town of Brecon, found its way to America. The details are unclear but Philips’s daughter married into the Scourfield family of New Moat, Pembroke and his library passed to them, and it is probably no coincidence that a Morris Scourfield was one of the first recorded purchasers of land for the Pennsylvania community. At some point before its departure for America the main text of the MS was foliated by Edward Lhuyd as a result of which we know how many leaves are now missing. The MS first surfaces in the library of the Massachusetts Historical Society in Boston as a gift, probably in the early nineteenth century, and became their MS. 5.
In early 2012 it emerged that the MS was to be sold through Sotheby’s in London at an auction on 10 July 2012. The description composed by Sotheby’s, which made some interesting claims about the nature of the text and language, left it in no doubt that they were hoping for a wealthy American buyer; it ended, ‘It seems impossible that any such witness would ever again be allowed export from the United Kingdom, and so this must be the final appearance of this language on the open market’. The previous occasion a medieval Welsh MS came up for sale was in 1923 when the National Library of Wales (NLW) purchased the Hendregadredd MS (NLW MS 6680) for £150. The estimate on the Boston MS was £500,000–700,000.
I had been asked by the National Library of Wales to examine the MS and write report on it with a view to a bid being made. So in late June, Daniel Huws, former keeper of manuscripts at the NLW, Maredudd ap Huw, manuscripts librarian at the NLW, and I met in London and spent the afternoon with the MS. It was immediately clear, despite the carefully selected photographs in the catalogue, that the MS was in very poor condition – coloured initials cut out, pages damaged to the point of near shredding, and general all-round distress – and a hot summer’s day in the Sotheby’s office was doing it no good at all. The time, however, was well spent giving the MS as close as an examination as it had probably had for a long time – not least because we might never have seen it again. On the basis of our reports and one also from a conservator send down from Aberystwyth, the Heritage Lottery Fund agreed to put up the majority of the funding with help from the Friends of the National Libraries and the Welsh Government.
When 10 July came around, I watched the auction on line in my office, and it was immediately clear that prices were very subdued. When lot 23 came up, it went for £450,000 (£520,000 with the buyer’s premium) and I knew the MS was going home. By the same afternoon, it had already acquired an NLW number – NLW MS 24029A – though among the medieval Welsh lawyers it will continue to be known by the siglum ‘Bost’ (if nothing else, as an important reminder of its eventful career).
The news of the purchase caused great excitement in Wales and it was put on display in the Library for several weeks before it was removed for conservation. On 20 September I met Daniel and Maredudd in the back-rooms of the Library to watch the MS being dismantled and the beginning of the long process of conservation. Despite the amount paid for the MS, it was clear that it needed complete dis-binding and every leaf repaired and conserved, and the only way that amount of money could be justified was to do everything to preserve it for the future. Every stage of the process was recorded; every bit of the binding preserved; every single loose fragment of vellum preserved. The first thing to go was the binding which has been too tight and was part of the problem as it had never let the vellum expand and contract with changes of temperature. It was then left overnight to allow the glue on the spine to soak and soften. The next day the sewing threads were cut and the MS came apart in our hands, and the real work could begin. 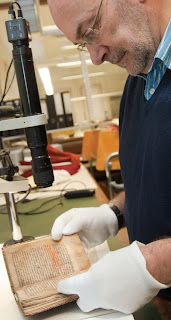 PR examines one of the more intact openings

So why does any of this matter?
While the tradition of medieval Welsh law is traced back to the reign of Hywel Dda (died 950), the earliest surviving MSS date from the mid-thirteenth century; between then and the sixteenth century there are surviving some thirty or more MSS, most in Welsh but some in Latin. The Welsh MSS fall into three groups, or redactions, the Iorwerth redaction (originally from Gwynedd), the Cyfnerth redaction (from the south and east of Wales), and the Blegywryd redaction (from the south-west, and in origin deriving from a Welsh translation of one of the Latin versions of the law). Although the use of Welsh law was probably more restricted after the fall of Gwynedd in 1282, it remained strikingly resilient and found a continued importance in the Marches  where the validity of a case might well have depended on a prior claim based on Welsh law. It is not surprising, therefore, that many of the MSS of Welsh law from the fourteenth century and later come from the east of Wales, and in recent years there has been a growing interest in these later aspects of the history of Welsh law. 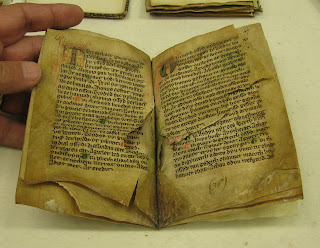 An example of a less than intact opening and why the MS was badly in need of conservation.

The Boston MS is one such. It belongs to the Blegywryd redaction and its text would originally have been in use in the south and west of Wales. Wherever the original provenance of the main text (and Daniel Huws suggests that this MS may have been copied at Strata Florida in the middle of the fourteenth century), it appears from the later annotation that the MS can be associated with Brecon.
One feature of the Blegywryd MSS, all of which seem to date to the fourteenth century or later, is that they tend to have a ‘tail’ of material often derived from the other redactions; it seems that, when these text were used in the March, the distinction between redactions was less important than simply having as full a law text as possible. For example, Oxford, Jesus College MS 57, a MS copied by Hywel Fychan, the main scribe of the Red Book of Hergest, has a long ‘tail’ of material mainly deriving from the Iorwerth redaction. In that case, the whole text is in the hand of Hywel Fychan and we can only tell that there is a ‘tail’ by comparison with other MSS. 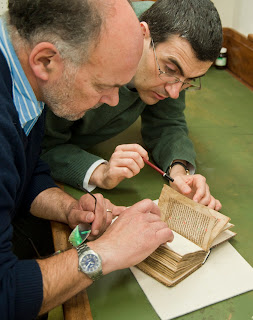 In this respect the Boston MS is extremely important: it has a ‘tail’  but it is in several different hands and clearly shows evidence of the cumulative gathering of extra legal material over a period of time. There are several phases: the main text ends on p. 181 (I use the pagination as this part of the MS was not foliated by Lhuyd) and there is extra material on the lower part of the page; a contemporary but rougher hand has then added legal material on the next few pages. However, subsequently – and this is one of the unique features of this MS – a gathering of six leaves was inserted after the current p. 182 containing a section of text in a finer, more professional hand from a different slightly later MS. We might imagine that this gathering was lying around and tucked into the back of the Boston MS for safe-keeping. This video clip shows me removing the extra gathering  and indicating that, once it is removed, the text either side is continuous. It is worth dwelling on the fact that that was probably the first time it had been removed since ca 1360. It will of course be re-bound back in the same place.
One could envisage that, if this MS had then been copied, the distinctions between these different additions in the ‘tail’ would have been lost. As it is, however, this MS provides us with a precious example of the creation a ‘tail’ and tells us something we could only have guessed at, namely that, while text was copied from other sources, another mode of ‘tail-creation’, as it were, was by simply inserting pages from another MS. In other words, this is a working-copy, much closer to the reality and practice of the law than a tidy version like Jesus College 57, and all the more valuable and useful for that. 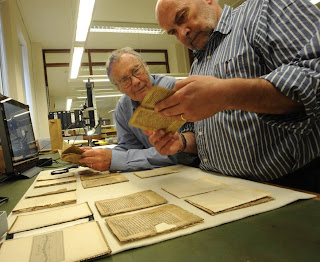 Daniel Huws and PR discuss the collation of the dis-bound MS laid out in quires on the desk.

What now ?
The MS is now undergoing repair conservation leaf by leaf and will be soon in a condition to be digitised; the images will then in due course be available to be consulted on the NLW’s Digital Mirror. Interesting details are still emerging; for example, when the MS was disbound, tacket holes were visible on some of the bifolia suggested that quires might have been held together with fine vellum strips before it was bound. 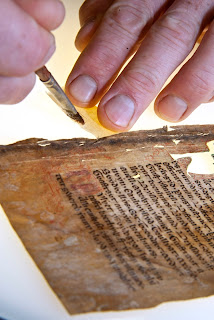 It now emerges that in quire 4 only there are worm holes in the vellum. Putting these details together, it would appear that the MS might have remained unbound for some time with the individual quires held together with tackets. Another intriguing glimpse into how it might have been used, and no doubt more will emerge from further study. The MS will be rebound and two facsimile copies will be made in addition, one of which will be bound so as to allow demonstration of the arrangement of quires and insertions. The purchase of this MS has provided an extraordinary opportunity to be able to observe the dismantling of a MS book, and in some ways its relatively poor condition has allowed things to be seen and learnt which would be impossible with a better preserved book. Already students in ASNC are finding out what an important learning and teaching resource this MS can be, and I hope others can benefit from what has been learnt in conserving this MS for future generations.

Many thanks to the National Library for permission to use the photographs, and in particular to Maredudd ap Huw and Daniel Huws, the conservation staff, Iwan Bryn James, Elgar Pugh, and Dilwyn Williams, and the photographers, Mark Davey and Michael Jones. More news and pictures can be found on the Llyfrgell Genedlaethol Cymru blog. [Edit: further updates on the National Library of Wales blog here]
Posted by Anglo-Saxon, Norse, and Celtic at 09:01