Dreams and Nightmares: Festival of Ideas

Dr Elizabeth Ashman Rowe, Lecturer in Scandinavian History, who organised the ASNC contribution to the Festival of Ideas, reports:

If I say so myself, ASNC’s event for the Festival of Ideas was a great success. The theme of the Festival this year was ‘Dreams and Nightmares’, so ASNC organised a series of short talks and recitations dealing with ‘Dreams and Nightmares in Early Britain and Ireland’. The event was held in the Judith E. Wilson Drama Studio, rather than the usual lecture room, and this contributed to the theatricality of the presentations, as did six metre-high panels designed and painted by current ASNC students, which illustrated scenes of dreams, visions, and monsters from the various ASNC literatures. The three-hour programme began with Prof. Paul Russell discussing ‘Dream narratives in Old Welsh and Old Irish’, followed by students reading passages of these texts in the original. The studio quickly filled to capacity in the first half hour and stayed that way until the end. From the Celtic languages the focus turned to the Germanic side of things with Dr Richard Dance explaining where the words dream and nightmare come from and reading the Old English poem The Dream of the Rood. 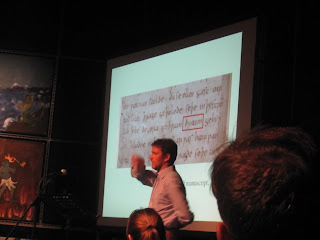 Three students read appropriate passages from Beowulf, and then Old Norse texts dealing with dreams and nightmares were read by Orri Tómasson (our teacher of Modern Icelandic) and Vicky Cribb (a postgraduate at ASNC) and explicated by Dr Judy Quinn. Dr Rory Naismith continued the English part of the programme by exploring the symbolism of the monsters and beasts that appear on Anglo-Saxon coins, and Dr Quinn capped off the event by discussing the Old Norse dreams and nightmares in compelling detail. 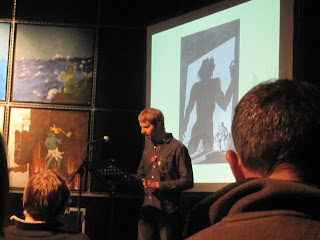 The audience’s level of interest was evident not only in their attendance but also in the spontaneous question-and-answer sessions that happened after every talk. The audience’s attention was grabbed as well by the signs directing the public to the event, for student volunteers outside the building had them attached to swords, spears, and axes, and the student doorwarden keeping order in the hallway outside the drama studio was kitted out in authentic period costume. The audience was requested to fill out comment cards as they left, and most of those gave the event the highest rating. ASNC once again ably communicated the attraction and interest of our field, supported by the volunteer efforts of the many students who helped in advance and on the day. 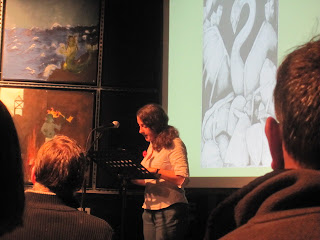