Conference report: Literacy, Memory and the Conversion of the Isles

Dr Brittany Schorn, network facilitator for the 'Converting the Isles' network, reports on their recent conference:

The Leverhulme Trust Converting the Isles Network, based in the Department, held its colloquium on ‘Literacy, Memory and the Conversion of the Isles’ on November 2–4 at University College Dublin.  The conference was one in a series, each considering a different aspect of conversion. This weekend historians, archaeologists, linguists and literary scholars brought their expertise together to produce a groundbreaking reassessment of the relationship between the conversion to Christianity and another revolutionary development with which it is intimately associated: the rise of literacy in northwestern Europe.

It was therefore fitting to begin Friday morning, after a warm welcome from John McCafferty, himself a church historian and head of the School of History and Archives, with a paper on the origins of ogham by Dr Anthony Harvey of the Royal Irish Academy. Dr Harvey challenged long-held assumptions about the chronology of the writing system, and suggested that contact with Latin in Ireland before St Patrick’s mission has been underestimated. His paper was complemented by Professor Anne-Sofie Gräslund’s on Germanic pre-Roman script. Professor Gräslund, of the University of Uppsala, demonstrated how the runic monuments of the late Viking Age reveal the effects of conversion to Christianity on a Scandinavian cultural practice. 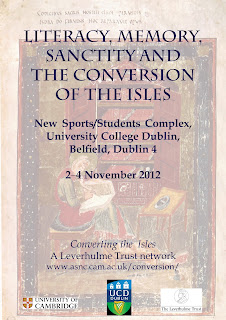 The theme of continuity as well as change continued into the second session of the day. Dr Mark Stansbury of the Classics Department at the National University of Ireland, Galway, considered the evidence of script itself to demonstrate that the infrastructure of writing shows remarkable continuity with the Roman world. He argued that rather than a symptom of isolation, the development of the distinctive features of Insular script represents continued contact. Dr Alan Thacker then turned the discussion to the individuals responsible for transmitting literacy and Christian learning. Focusing on the Cuthbertine corpus, he showed how the ways in which saints were remembered in early Anglo-Saxon England was shaped by the changing circumstances of the monastic communities that wrote their stories.

In the afternoon, art featured alongside inscription in a pair of papers by Professor Nancy Edwards of the University of Bangor and Dr Lise Gjedssø Bertelsen of the University of Uppsala. Dr Edwards brought together the evidence of inscriptions, images and symbols from Wales and Pictland to paint a contrasting picture of conversion in the two regions. Evidence from Scandinavia was then brought in by Dr Bertlesen who drew out the meaning of the images of the great Jelling Runestone, on which inscriptions, images and symbols work together to convey a powerful message of a new, Christian royal identity.

The day was brought to a close by a thought-provoking keynote lecture from a rather different perspective, delivered Dr Joseph McMahon of the Irish Franciscan Province. Speaking on his own experiences as a missionary, Dr McMahon offered valuable insights into what conversion means to a Christian evangelist.

The second day of the colloquium opened with a session on the written law, a phenomenon Dr Roy Flechner of UCD observed is ubiquitous within Christian culture across Europe. Professor Liam Breatnach of the Dublin Institute for Advanced studies examined the thoroughly Christianised society revealed by Ireland’s early laws and raised important questions about the use of medieval law texts. These questions were also central to the next paper, on the earliest Anglo-Saxon laws, by Dr Helen Forbes of the University of Exeter. Here too the laws, though strikingly different to the Irish material in other ways, painted a picture of a thoroughly Christian land and monarchy. A lively discussion ensued and was continued in the roundtable at the end of the afternoon.

The next session was opened by Dr Connor Newman, of the National University of Ireland, Galway, who brought archaeological evidence back into the discussion with a paper on conversion through the prism of art. He demonstrated the adaptation of older traditions for Christian purposes, often to significant and sophisticated effect. Dr Alex Woolf of the University of St Andrew’s continued the session by looking at the word plebs, which became the normal word for ‘parish’ in Welsh and Cornish. Taking a broad view across the post-Roman West, he examined how this common noun was used an adapted in both Insular Latin and vernacular languages.


Dr Siân Grønlie of the University of Oxford and Dr Barry Lewis of the University of Wales Centre for Advanced Welsh and Celtic Studies, Aberystwyth looked at the role of saints in conversion of Iceland and Wales. Dr Grønlie explored their curious absence in the Old Norse sources, which portray the men responsible for bringing Christianity to Iceland as complex and somewhat morally problematic individuals.  Dr Lewis then discussed the literature of the Brittonic regions, in which national conversion is of only marginal interest.  Instead of pagans, these texts were more interested in the problem of converting bad Christians.

The themes and questions arising from the various sessions were finally brought together by Dr Elva Johnston of UCD, who re-assessed what literacy in early medieval Ireland actually meant, with important observations applicable across Ireland, Britain and Scandinavia. She reminded us of how small the literate class would have been, confined to, but not encompassing, the social elite whose primary mode of communication remained oral. It is important, she argued, to envisage a more complex model than is often supposed, with a much larger society interacting with literacy and supporting it, if not reading or writing themselves.

Podcasts and other materials arising from this fascinating conference will shortly be available on our website. We look forward to continuing the discussions begun in Cambridge and Dublin at Bangor University on March 22–23, 2013 in a colloquium on. Further information can be found HERE.