Construction work in June 2009 on a relief road cutting across Ridgeway Hill, close to Weymouth, Dorset, uncovered the chilling and utterly unexpected remains of what could only be interpreted as a mass execution. In the course of subsequent excavations, 51 skulls were found heaped next to the rest of the remains, which had been dumped haphazardly into a quarry pit. Many of the bones showed evidence of violent, even deadly injuries including blows with edged weapons to the head, jaw and upper spine. Others displayed wounds to the chest, stomach and pelvis, or defensive blows to the hands. All had been young men, aged in their teens or twenties, with a few in their thirties. No evidence of pins, brooches or other items associated with clothing was found, suggesting that the men had been stripped naked either before or after death. 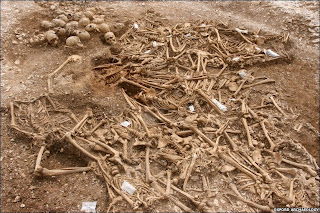 picture from BBC News website
After initial speculation that the remains could have been of Roman or pre-Roman Iron-Age date, radio carbon dating of the remains in July 2009 revealed that they had been killed at some point between AD 910 and 1030. Recent isotopic analysis by NERC Isotope Geosciences Laboratory of the teeth taken from ten individuals has added another piece to the puzzle. These men had not been brought up eating the food or drinking the water in an area with chalk geology such as Dorset. Rather, they grew up in a climate colder than England's, probably north of the Arctic circle in the case of one individual. They had eaten a high-protein diet comparable with that known from human remains excavated in Sweden. In other words, it is likely that these young men were Scandinavians.

Further details will doubtless emerge concerning this exceptional and grisly discovery, and it is to be hoped that these will allow some sort of conclusion to be reached about what events may have precipitated the slaughter of approximately fifty vikings in Dorset. The Anglo-Saxon Chronicle offers a few possible contexts. Dorset was ravaged by vikings in 998, and by Cnut's invading army in 1015. Most famously, in 1002 Æthelred II ordered the death of 'all the Danish men who were in England': the ensuing massacre took place on St Brice's day (13 November). Any or none of these events could lie behind the Ridgeway Hill execution burial. Whatever its background, it is a stark reminder of the real and very bloody violence of the Viking Age which took its toll on Anglo-Saxons and their Scandinavian opponents alike.
Posted by Anglo-Saxon, Norse, and Celtic at 09:39