On Saturday 20th March, members of the ASNC Department were in York to hold a one-day conference on The Early Medieval World, aimed at Year 11 and 12 pupils and their teachers. Despite a slightly inauspicious start, involving a fire in the pub in which we were drinking the night before, and a fire alarm in the early hours of the morning at our hotel, the event itself proved to be a massive success. More than one hundred pupils and teachers - largely from schools in Yorkshire, Lancashire and Derbyshire, although some had come from London, and even as far afield as Dover - gathered at St Peter's School (we loved the ASNC connection - the school even claims Alcuin as a past headmaster!) for a day of mini-lectures on themes as diverse as cultural contacts in early medieval Yorkshire to the historical Macbeth. 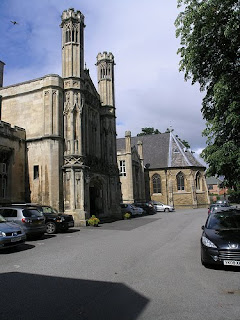 St Peter's School, York, who hosted our event superbly.
Dr Andrew Bell, Tutor for Admissions at Gonville and Caius College, began the day with a talk on 'Thinking about Early Medieval Europe' which addressed wide historical themes, and various approaches to early medieval history. Next, Dr Fiona Edmonds, Lecturer in Celtic History, outlined evidence for British-speaking communities in Anglo-Saxon England as late as the eighth century. Fiona focused particularly on Yorkshire and Lancashire, and engaged the interest of the audience by using toponymic evidence from their own localities to support the argument for a continued British presence well into the Anglo-Saxon period.

After lunch, Dr Debby Banham, an expert in Anglo-Saxon diet, farming and medicine, gave a fascinating insight into everyday life in Anglo-Saxon England, touching on diet, clothing, and shelter. Dr Richard Dance, Senior Lecturer in Old English Language and Literature, gave the audience a highly entertaining, and interactive, introduction to the Old English and Old Norse languages. Lastly, I spoke on medieval Gaelic influences in modern English literature, focusing on the historical Macbeth. A quick glance at the feedback questionnaires suggest that there was a universally positive response to the day, with many pupils and teachers lamenting the fact that they have no opportunity to study medieval history or literature at GCSE or 'A' Level.

The Department would like to say a massive thank you to the two undergraduates, Albert Fenton and Rebecca Wilkinson, who came to York with us, and who spoke to many of the young people who attended, offering them information on everything from university applications to life as an ASNC. They were brilliant, enormously helpful and unfailingly enthusiastic. Thanks guys!
Posted by Anglo-Saxon, Norse, and Celtic at 13:13