An Irish History of Civilization

A recent reading experience has left me with the feeling that perhaps I should emerge from under my cultural rock a little more often. The work that inspired this minor bout of introspection was Don Akenson's large two-volume An Irish History of Civilization (2005). That's right, An Irish History of Civilization; not A History of Irish Civilization. Akenson's intriguing work is not a history of Ireland or Irishness but a presentation of the Irish experience of world history in Talmudic form. In his preface Akenson suggests that his work is 'a collection of fictive short stories or, if you prefer, of Aggadah: very little in the way of Halachah here'.

Even from a purely 'ASNC' point of view his book is full of individually-titled pieces that provoke an examination of how we appreciate the materials with which we work and also our own relationship with them. For example, in 'The Beginning', on the passage graves along the Boyne, he remarks of their creators that 'these are a stone-aged people, but they are as far from being primitive as we are from being civilized' (vol I, p. 59). Certainly food for thought, especially when one reflects on the continuing controversy over the proposed route of the M3 motorway through the Tara-Skreen valley. In 'The Land', Akenson contrasts the pre-modern and modern Irish landscape and suggests that 'you've never been there even if you've lived there all your life' (I, p. 60). His brief tale focuses on changes such as deforestation, widespread enclosure of land, draining of lakes and consumption of bogs and concludes: 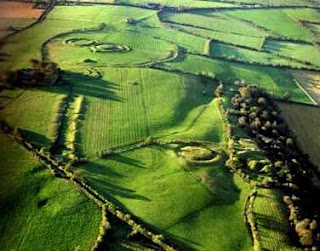 The Boyne Valley (from www. mythicalireland.com)
'So all the events that happen before, say, 1600, happen in a theatre that we have never visited, and are outlined against backdrops we can only intuit. When heroic chariot battles occur in the central plains, they are on a topographical scale now impossible to duplicate; when journeys in the northern drumlins and woodlands are mentioned, they take place in a claustrophobic tangle of scree and tree that is no longer tangible; and when an adventurer crosses parts of the far south or far north, he is frequently travelling and travailing across a desert waste where there is no fodder for horses, no grass, all is heather or bog and there are only tiny settlements, most of which the traveller can pass within a mile of and never know are there' (I, pp. 60-1).

One might go to the works of Frank Mitchell (The Shell Guide to Reading the Irish Landscape, Dublin, 1986) or Fergus Kelly (Early Irish Farming: a Study based mainly on the Law-Texts of the 7th and 8th Centuries A.D., Dublin, 2000) for a discussion of the medieval Irish landscape from a more 'scientific' point of view and find a great deal to contradict the details of Akenson's description, but to do so would be to miss the point of this particular piece of Aggadah. It is the overall thrust of the stories that is critical and, as Akenson wryly notes in his prefact, 'as far as mere accuracy is concerned, not all seeming errors in the text are accidental. Sometimes even the immortal Homer only pretended to nod'!
Posted by Anglo-Saxon, Norse, and Celtic at 07:08