Is ASNaC on the rise in popular culture?

The early medieval period has always been an area of exploration for the arts. In painting, sculpure, literature and cinema - in essentially all the creative media - there has been a longstanding tradition of appropriation of the medieval period as context for storytelling and entertainment. But it would be fair to say that the use of the early middle ages (or the "ASNaC period", as I like to think of it) in the arts has always been a sub-genre at best in any media; often it is so low-profile that you might call it an underground movement. Let's face it, how many people would recognise an early medieval novel that is neither Lord of the Rings or The Once and Future King if it came up in conversation? And neither of those can even be classed as 'early medieval' in the traditional sense, since they are not concerned with accurately representing the period, either historically or culturally. Likewise with films, the early medieval period has largely been overlooked. There are one or two lesser-known classics, such as 1958's The Vikings and 1952's Ivanhoe, but the fame of most films set in the early middle ages has been restricted to cult status. Even when 'blockbusters' as recent as the noughties have been made set in that period, they have usually been met with commercial and critical disappointment: take 1999's The 13th Warrior, 2004's King Arthur or 2007's Beowulf as prime examples of big-budget Hollywood treatment of the ASNaC period floundering in lukewarm critical reception and mediocre box-office takings. Such failures in the past have condemned the genre to low-budget and therefore mostly low-quality fare like Siege of the Saxons (1963) and Beowulf and Grendel (2005). Incidentally, 2007's Beowulf is fast developing a cult and has enjoyed considerable success in DVD sales. 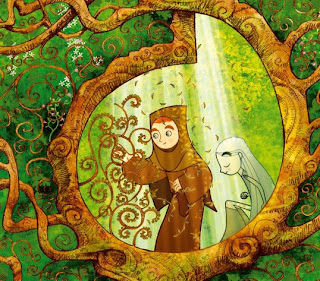 The Secret of Kells

But the mainstream status of the ASNaC period on film could be about to change over the next few years. 2009's The Secret of Kells has proved to be the little-film-that-could: like many films of the ASNaC genre, and of British and Irish cinema more generally, it is a low-budget effort. The film puts a supernatural, rather quaint spin on the reality of medieval life, and has received a very limited run in cinemas, enjoying mild commercial success. However, it has defied all expectations and landed a nomination for Best Animated Film at this year's Academy Awards in Hollywood: the highest accolade it could hope to achieve. The results of the Oscar's will be announced this Sunday, so we'll have to wait and see if it achieves the award. But what is perhaps more significant is that news of The Secret of Kells's Oscar nomination has coincided with the announcement of numerous other ASNaC period film projects. Coming this month is Dreamwork's How to Train your Dragon, while coming later in the year are Centurion and Valhalla Rising, as well as the more old-fashioned Ironclad, plus an untitled Viking project by Mel Gibson which will start in production soon. And just for good measure, there are two Arthurian projects on the horizon: one 'original' take on the legend (possibly to be directed by Guy Ritchie) and a remake of 1981's Excalibur. With the exception of How to Train your Dragon, all of these projects have stated their intention to be faithful to the period, both in terms of visual accuracy and their representation of early medieval culture. Could this mark the beginning of a new era of popular but accurate ASNaC period films?

Personally, my money's on the Mel Gibson project. He has already directed three historical 'action' films, most (in)famously Braveheart (for which he won the Best Director Oscar) and later The Passion of the Christ and Apocalypto. Although I love Braveheart, it is the latter two films that were particularly impressive, combining wonderfully evocative visual detail and as-accurate-as-possible historical languages. Moreover, they were good solid films in their own right, which won commercial and cult success. Of his latest project Gibson has promised "it's going to be in the English that would have been spoken back then, and Old Norse, whatever the ninth century had to offer. I'm going to give you real." After Passion of the Christ and Apocalypto, I believe him: the scale of budget he can muster, plus his ability to construct a good film that appeals to a wide audience, could finally produce the kind of mouth-wateringly accurate and entertaining ASNaC film we haven't seen since The Name of the Rose in 1986. I'm not asking for non-fiction storylines, but simply for good films. Hopefully, if the upcoming wave of ASNaC films proves successful (both critically and commercially), then ASNaC itself might enjoy its own renaissance, and may get to the point where it is as accepted and widely-known as science. Or at least Lord of the Rings.

But we'll have to wait and see.
Posted by Anglo-Saxon, Norse, and Celtic at 03:20