In search of Carn Droma: exploring the boundaries between Picts and Gaels

Philip Dunshea writes:
‘Reconnaissance walking’ is seen by modern archaeologists as a preliminary technique before proper field-surveying gets under way: a fairly casual way of assessing whether a site is worth investigating. But for much of the twentieth century it was a big part of the business for many medievalists. The list of the great walkers is a long one but honourable mention must go to O.G.S. Crawford and Margaret Gelling.
Gelling, a toponymist who eventually became president of the English Place-Name Society, spent countless hours bush-whacking across woodlands and fields, tracking contour lines and fluvial patterns, all in an effort to make herself as familiar with the intricacies of the English landscape as her beloved Anglo-Saxons must have been. Crawford, meanwhile, was wrapped up in what he believed was a personal crusade to survey and catalogue Britain’s heritage before it was swept away forever by modernity. Crawford knew that history and maps were inseparable, and as the Ordnance Survey’s first History Officer, he was well placed to follow this conviction. One of his lasting contributions to archaeology was in pioneering the use of aerial photography.  To both Gelling and Crawford the legacy of the past (pre-historic, Roman and medieval) was there to be read in the landscape.
Over the last few decades, in common with every other academic discipline, early-medieval archaeology and early-medieval history have become so specialised in their own right that it’s now almost impossible to maintain an expert presence in both fields.  Nowadays most historians in the ASNC line of work restrict themselves to libraries, largely because they’re dependent on work by philologists and other people who know more about the source-texts than they do. Archaeologists (or the dwindling cohort of archaeologists who don’t yet work in laboratories) have the great outdoors to themselves.
This seems neither fair nor justified. In the early medieval period the lie of the land must have had a vastly greater impact on day-to-day life than it does for us today. In many ways the texts studied by ASNaCs are just as rooted in the physical environment as any material remains, and this was brought home by some recent work I’ve been doing on the early-medieval significance of Scotland’s watershed divide.  The research was all supposed to be focussed on a topographical feature called Druim Alban (the ‘Ridge’ or the ‘Spine of Alba’) which was understood to mark the frontier between the Picts (in the east) and the Scots of Dál Riata (in the west). In all contexts it is clear that the term refers to a mountain range – but which one? 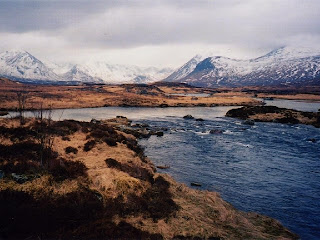 Druim Alban (photo credit: Philip Dunshea)
Adomnán, abbot of Iona in the later seventh century, writes that his predecessor Columba had to travel ‘beyond the mountains of Druim Alban’ on his way to evangelise the Picts. That meant crossing from Iona, and the coastlands of the Firth of Lorne, to the Pictish heartlands of the east. Then when the northern Pictish kingdom of Fortriu fell out of love with the Columban clergy in the early eighth century, the latter were sent into exile beyond Druim Alban. Even centuries later, when Dál Riata and the Picts had coalesced to form the kingdom of Alba (later Scotland), Druim Alban was still a famous landmark. In the twelfth-century law code Leges Scocie, it was used to delimit the inner sanctum of the Scottish crown’s legal authority – west of Druim Alban, defendants and their warrantors were given longer to reach the southern courts.
Unfortunately none of this makes Druim Alban’s location any the clearer. Modern historians have tended to work round the problem by taking the term as referring to the whole of the Highlands; but for it to function as a legal and a national frontier, Druim Alban must have had a more precise significance. Close examination of some old maps and a bit of phenomenology suggest that the most likely candidate is actually the line of the watershed divide, which can be traced running through the mountains north from Loch Lomond to the Great Glen. To this day the county line of Argyll follows the watershed for much of its length (and Argyll, ‘coastland of the Gael’, represents the core of early-medieval Dál Riata). To the east of the divide is the basin of the Tay, the great river which drains almost all of the eastern Central Highlands into the North Sea; to the west, all streams flow down into the Firth of Lorne and the North Atlantic. To get from Dál Riata to Pictland, in other words, all you had to do was follow the rivers uphill and then down again. In the days before roads and railways came to the Highlands, it’s not hard to imagine how the watershed could have functioned as a visible frontier and a useful navigational marker.
Perhaps the most important route to cross the divide was that which followed the Tay up to its headwaters in Breadalbane, and then dropped down to Loch Awe and the sea beyond.  Up until the early twentieth century this was marked by a famous cairn called Carn Droma (‘Cairn of the Spine’). Carn Droma is first mentioned in a fourteenth-century charter (where it is linked specifically with Druim Alban) and figures prominently on most of the early maps of Scotland. After the 1880s, however, it disappears from the maps; beyond one mention in a 1920s guidebook, Carn Droma has been quietly forgotten.
At this point Crawford or Gelling would surely have gone on a reconnaissance field-walk – so that is what I did. Along with me came a geologist, presumably well qualified to tell the difference between a cairn and a large pile of rocks. Our field-walk was just that – a tramp around a rough hillside. And Carn Droma is still there, buried deep in the woods above the little Highland village of Tyndrum, and still bang-on the line of the watershed divide. The old route from Pictland to Dál Riata is still there too, now marked by the A85 and the Glasgow to Oban railway. The cairn itself – which may date back to the Bronze Age – is heavily scarred by ploughing  and in a fairly dilapidated state, but it remains a special spot. From here you can gaze west down into Argyll and Columba’s domain; to the east, through the trees, are the twin tops of Ben More and Stob Binnein, the rough bounds of Breadalbane and the lands of the Picts. Proof, if anything, that field-walking is still a worthwhile pursuit. Go and see for yourselves. 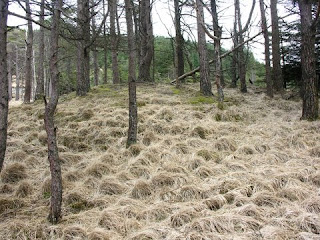