Seachtain na Gaeilge will open with a reading by the Irish poet Biddy Jenkinson, who has been praised by Professor Ciaran Carson (Queen’s College, Belfast) as ‘one of [Ireland’s] greatest writers in any language’. Ms Jenkinson will introduce the background and content of each poem in English.  The poems will be read in Irish.  The Poetry Reading will take place in the English Faculty (9 West Road) in Room G-R05.  A wine reception will follow in the ASNC Common Room.  The reading is free of charge and open to students, staff and the general public.
Biddy Jenkinson brings a distinctive style and purpose to her writing, and her highly regarded collections of verse include Baisteadh Gintlí (1987), Uiscí Beatha (1988), Dán na hUidhre (1991), An Grá Riabhach (1999), Mis (2001), Rogha Dánta (2000) and Oíche Bhealtaine (2005).  She is also the author of prose works, including An tAthair Pádraig Ó Duinnín—Bleachtaire (2008). 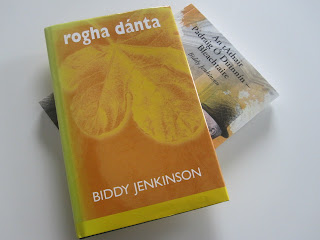 8 MARCH (Thursday, 5.30pm):  Dánta agus Ceol ‘Poems and Music’ / Irish films
Modern Irish language students will present Irish poems and traditional Irish songs in the ASNC Common Room (2nd floor, English Faculty, West Road).
The performance will be followed by a showing of the short Irish film Lipservice and the RTE documentary Oileán Eile ‘Another Island’ (1985), which presents the literary and cultural legacy of the Great Blasket Islands through archive footage of daily life, an examination of the island autobiographies (Tomás Ó Criomhthainn’s An tOileánach and The Autobiography of Peig Sayers) and accounts by well-known scholars who visited the island, including Robin Flower, Carl Marstrander, Kenneth Jackson and George Thompson. 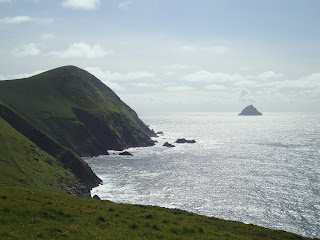 The Blasket Islands
13 MARCH (Tuesday, 1-3pm):  Exhibition of Irish and Irish related manuscripts, Parker Library, Corpus Christi College (*Registration required)
More than thirty items of Irish interest from the Parker Library’s world renowned collection will be on display. Students, staff and members of the public are invited to register for a guided viewing of these exquisite examples of Irish insular art, decorated initials, glossaries, saints’ lives, prophesies, chronicles and charters dating from the 8th to the 16th century.  Highlights of the exhibit include the Hymn on St. Patrick attributed to Saint Secundias (Seachnall) or Saint Colmán Elo, the only extant copy of the canons of the ‘First Synod of Patrick’, the first European description of a giraffe (written by an Irish monk!), one of the earliest maps of Ireland, and the first printed piece of Irish anywhere in the world: the bardic poem Tuar feirge foighide Dé, composed by Philip Bocht Ó hUiginn in 1571. Two tours (1-2pm and 2-3pm) will be conducted on 13 March.  To register please contact Dr Denis Casey: dc399@cam.ac.uk.
The Parker Library exhibit has been organized by Dr Denis Casey, Teaching Associate in Anglo-Saxon, Norse and Celtic and Postdoctoral Fellow of the Society for Renaissance Studies, and Dr Christopher de Hamel, Donnelly Fellow Librarian at the ParkerLibrary 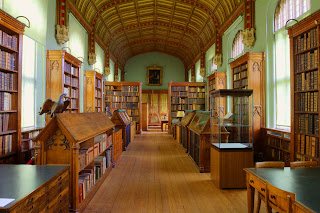