1345: A strange thing appeared east in Lagarfljót and the Fljóts Dale district, and people know that it was alive. Sometimes it looked like large islands but sometimes it shoots up coils and gaps in between, and many hundreds of fathoms long. No-one knew the size of it, and neither a head nor a fishtail has been seen on it, and for this reason people do not know what [kind of a] wonder it was.

The Icelanders were familiar with ordinary fish and marine mammals, but this creature was new to them. On the basis of the reference to 'coils', Dr Rowe at first was reminded of the Loch Ness Monster, but on further reflection a giant squid seemed more likely. Dr Rowe is currently at work on producing the first English translation of the medieval Icelandic annals, and further unsual events are sure to turn up. 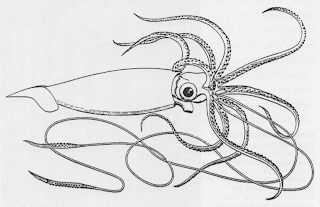 Image from http://en.wikipedia.org/wiki/File:Giant_squid_logy_bay.png
Posted by Anglo-Saxon, Norse, and Celtic at 06:33