'The Staffordshire Hoard (or perhaps more accurately the 'Hammerwich Hoard', after the place where it was found) is certainly a very significant discovery, and represents a most welcome addition to our knowledge of Anglo-Saxon material culture in the seventh century. It includes a large quantity of gold fittings removed from swords and associated military equipment, such as sword pommels and scabbard bosses, and on the face of it looks like the most obviously valuable parts of war-gear captured from a defeated army. Yet most interestingly, it also includes a golden cross, which had been crumpled up in order to make it fit into a container of some kind, and also a folded strip of gold (perhaps removed from a wooden cross) bearing a rather crudely written Latin inscription calling for God's aid against His enemies. 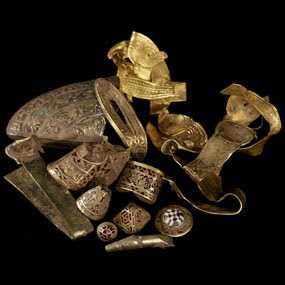 The interpretation of this extraordinary find will depend in part on its composition, and in part on whatever can be established about its date, whether from analysis of the gold, or from the script on the gold strip; but it is difficult to resist the supposition that it represents loot taken from an East Anglian army sometime in the second or third quarter of the seventh century, and brought back through the east midlands and along Watling Street into the heartland of the kingdom of the Mercians (the vicinity of Tamworth and Lichfield, Staffordshire). The hoard thus substantiates what we knew or could suspect about the power, wealth and predatory activities of the Mercians in the seventh century, most famously during the reign of Penda (c.632-655); and it gives us something, from Mercia, to set alongside the rich inhumation cemeteries of Kent, or the burial mound at Taplow (Buckinghamshire), or the royal burial ground at Sutton Hoo (Suffolk), or the complex of buildings at Yeavering (Northumbria), or the more recently-discovered chamber grave from Prittlewell (Essex). In his Ecclesiastical History, written in 731, Bede provided the context for our understanding of all these sites, with his tales of the English kings and kingdoms in the seventh century; and as more is discovered, the larger picture comes into sharper focus.'

An appeal is now underway to raise the necessary funds for the entire hoard to be kept in the West Midlands, where it was found. Prof. David Starkey launched the appeal, describing the hoard as 'gangland bling'.
Posted by Anglo-Saxon, Norse, and Celtic at 04:26