This week's discovery of what purports to be Queen Eadgyth's body in Magdeburg, Germany, will, if confirmed scientifically, certainly be an important one. It has long been known that Eadgyth was laid to rest in Magdeburg, but since her body was transferred from its original tomb in 1510 it was not known precisely where it might lie. Although the body alone tells us little new about the politics of the era, it provides an opportunity to reflect upon the events of the early tenth century and gives us a tangible counterpart to the evidence of our written sources. 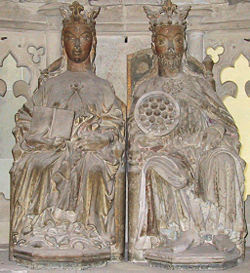 Eadgyth and Otto, Magdeburg Cathedral
Eadgyth was the daughter of King Edward (899-924), the son and successor of Alfred the Great (876-99), and the sister of King Æthelstan, the first king to rule all of the English (924-39). She ended up in Germany as a part of a dynastic alliance forged between Æthelstan and his continental neighbour, King Henry I of East Frankia/Germany (919-36). The kings arranged that she be sent over to wed Henry's eldest son, Otto (the later Otto I or Otto 'the Great' of Germany), thus confirming the pact. This was an important alliance indeed as it brought together the two most powerful European rulers of the time: Henry, who ruled a massive kingdom, stretching from Schleswig-Holstein in the north to the Swiss and Austrian Alps in the south; and Æthelstan, who had successfully taken York from the vikings, for the first time unifying all of what was to become England.

The alliance was clearly important to both rulers. For Æthelstan it ensured contacts at the most powerful court in continental Europe, establishing a familial link with Otto, who would later be crowned emperor by Pope John XII and command a hegemonic position over his neighbours. For Henry, however, who was the first ruler of his dynasty to be elected king, the marriage had even more to offer. It helped provide him with much needed legitimacy, showing his son to be worthy of a bride from one of the most established dynasties in Europe. This marriage takes on a further significance when we consider that Henry was trying to secure the succession to the throne for his first-born son, Otto, alone. Previously the custom in East Frankia (or Germany, as it was to become over this period) was to divide the kingdom between all legitimate sons on the death of the king, but now only one son was to succeed (the right of succession which we would now term primogeniture).

To ensure that this scheme worked Henry had to secure for Otto a unique position above that of his brothers, and here is where Eadgyth came into play: she gave Otto a connection to the West Saxon bloodline, to a much older and more established dynasty, which enjoyed contacts across Europe. Eadgyth thus played a central role in establishing Otto's succession at the expense of his brothers and her importance to the dynasty, which later to be know as the 'Ottonians' after the name Otto, borne not only by Otto I, but also his son and grandson, can scarcely be underestimated. 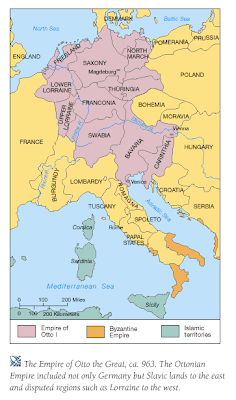 (map from http://www.thenagain.info/WebChron/westeurope/OttoGreat.html)
After Otto's succession Eadgyth continued to be important at court and her death in 946 was lamented by many contemporary writers. She was interred as befits a queen in Magdeburg, the monastery which she and Otto had jointly founded in 937. The very act of burying Eadgyth at Magdeburg may have heralded Otto's grand plan to raise the church to the status of an archbishopric (despite opposition) and make it the m ost important church of his realm. However, his decision may also have been made out of love. It is notoriously difficult to reconstruct the emotions of medieval rulers, but all indications are that Otto and Eadgyth shared a genuine intimacy and when Otto died in 973 it was next to Eadgyth, his first wife, that he was buried.
Posted by Anglo-Saxon, Norse, and Celtic at 08:13