Iron Age gold in the National Museum of Scotland

ELB  writes:
While in Edinburgh for the purpose of giving a seminar in the Celtic and Scottish Studies department of the University, I found time to see the display of four recently-discovered Iron Age gold torcs at the National Museum of Scotland. 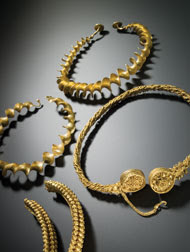 gold torcs, from the National Museum of Scotland website
The torcs are on public display for another week or two, after which they will be taken to be valued under the Scottish law of Treasure Trove; following this, they will be allocated to an appropriate museum. The torcs, which were discovered near Stirling by David Booth during his first outing with a metal-detector, are beautiful, and while two of them appear to be of native origin and design, the other two are not. Of those, one, which survives in two fragments, is of French origin, possibly from near Toulouse, and provides evidence either of international trade, or the movement of people or prestige objects, between Continental Europe and the region which is now Scotland, in the period c.300-100 BC. The fourth torc is even more interesting, and, according to the National Museum, is unique. 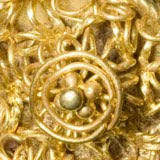 detail of torc, from National Museum of Scotland website
The shape of the fourth torc is characteristic of designs found in north-west Europe, but we are told that the craft skills used to make the torc suggest a goldsmith trained in the Graeco-Roman world. The implications for our understanding of international trade, and the exchange of prestige objects, in pre-Roman Britain are yet to be fully understood, but this exciting find, while not as large as the Anglo-Saxon Staffordshire Hoard, is surely just as significant, albeit for an earlier period. If you're in Edinburgh before 10th February, I highly recommend taking a look at these breathtaking finds.
Posted by Anglo-Saxon, Norse, and Celtic at 04:36