One of the best things about working for the Vitae Sanctorum Cambriae project has been having the chance to edit the Latin lives of the border-crossing saint Winefride/Gwenfrewy. Winefride is presented as a seventh-century saint, although there is very little evidence for her cult before the twelfth century.

In the first half of the twelfth century, two Latin lives of Winefride were composed. One is short, anonymous, and contains a long list of miracles at Winefride’s Well at Holywell. The other is far longer, and was composed by the verbose Robert, prior of Shrewsbury, between 1138 and 1142.

This Life is especially interesting, as it contains an account of how Robert and others went to Winefride’s burial place at Gwytherin in around 1137 and dug her bones up and took them back with them to Shrewsbury, despite considerable local opposition. A prominent modern adaptation of this is the Brother Cadfael novel A Morbid Taste for Bones by Ellis Peters.

Robert of Shrewsbury’s Life was also translated and adapted into Middle Welsh and Middle English by the fifteenth century at the latest.

The Lives differ in many details but tell the same basic story, and probably both drew upon a lost Latin Life of Beuno (the source of the Middle Welsh Buchedd Beuno (just re-edited by Patrick Sims-Williams)), in which Winefride featured as a character.

As a child, Winefride is taught by St Beuno, and decides to follow the holy life. One day, while her parents are at Mass, Caradog, the son of a king, comes to Winefride’s house and demands to marry her. Winefride manages to escape and runs to the church by her house, but Caradog realizes she has run away, and charges after her on horseback. Just as she is about to reach the church, Caradog cuts off her head.

St Beuno is saying Mass at the church at the same time. He comes outside and melts Caradog into the ground. Picking up Winefride’s body and head, he prays for God to resurrect her, which God does.

I decided it was high time for me to take a look at the sites associated with Winefride for myself. (Sadly I didn’t manage to make it to Rome, but I did pop by Rhyl on the way back). 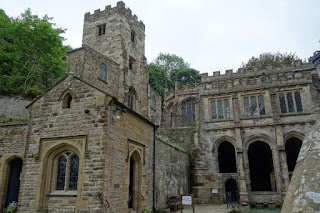 This is the main site of devotion to Winefride, both now and in the Middle Ages. It survived the Reformation and somehow managed to thrive up to the modern day.

The well used to be supplied with a huge amount of water from a natural source, but this was disturbed by industrial work in modern times, and the water now comes from a public source.

The shrine is situated on a slope. In Robert’s Life, Winefride’s head actually rolls down the hill into the church, to the horror of the parishoners.

Immediately above the well survives the medieval chapel dedicated to Winefride. 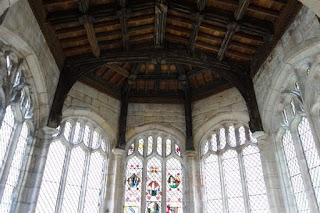 There was much work undertaken at this site at the close of the Middle Ages by Thomas Pennant, abbot of the nearby Basingwerk Abbey (also worth a visit!) This was celebrated by a number of Welsh poets of the time, including Tudur Aled, who composed a cywydd to Gwenfrewy and her well.

This is Winefride’s first stop on the journey to Gwytherin, according to Robert’s Life. 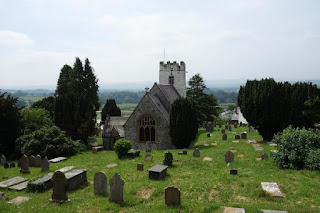 The church at Henllan is interesting in that the tower (now seemingly used as an elaborate broom-cupboard) is separated from the body of the church. 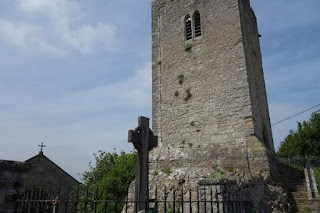 At Henllan, so Robert of Shrewsbury tells us, Winefride meets St Sadwrn, who apparently receives her in a kindly manner, although he wastes no time in sending her on to Gwytherin.

At Gwytherin, Winefride meets St Eleri, and later leads a community of nuns. It is here that Winefride dies for the second and final time.

Robert provides more details about Gwytherin from his travels there to take Winefride’s bones away. He notes that there were two cemeteries: one for saints, and one for those who die now.

One of these (the saints’ graveyard) is now an empty field, but is thought to have contained Winefride’s chapel (demolished in the eighteenth century). 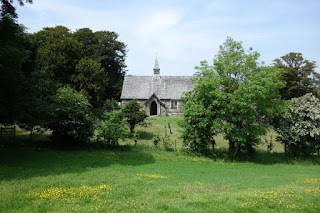 Gwytherin was certainly the quietest of all the locations on the journey.

The church itself closed in 2005. After this, its most important remaining artefacts were moved to Holywell. Perhaps I should have ended the pilgrimage by travelling to Shrewsbury but I could not bring myself to it.