Out of the Margins and Into the Media

The last link I added to my list was on the 25th of May.  It was to a Wordpress blog which had been published on the 19th of that month, nearly seven weeks after Paul Russell and I had given our lecture on the Black Book of Carmarthen at the National Library of Wales (NLW).  I remember the day before the talk, either around the time that he had spoken with the journalist at The Independent, or perhaps as I was waiting to speak to someone from the BBC News website, that Paul told me everyone would have forgotten about the story in two days.  Or maybe it was just after Maredudd ap Huw, the Manuscripts Librarian at NLW, had spoken to us about the possibility of an interview with Welsh television channel S4C.  In the stress and adrenaline and excitement of the day, I think I probably looked a bit green and this was meant to be comforting.  But they didn’t forget.

The story began, incidentally, on my birthday.  I don’t normally ‘bound’ anywhere, but I was bounding down Penglais Hill, trying not to tumble over in my excitement to spend the afternoon with the Black Book of Carmarthen, a manuscript which not only preserves the oldest collection of Medieval Welsh verse, but which is also the only compilation from South Wales to survive from its period.  It is also the subject of my PhD dissertation, so the opportunity to spend time with it was sweeter than any birthday cake could have been.  Paul had come over from Cambridge in part for the occasion, as this would be such a vital component of my research.  In particular, I was interested in examining the margins and gaps of the manuscript, because these were the spaces which had suffered ‘cleansing’ at the hands of some misguided individual around the end of the sixteenth century.  While it is possible to see evidence of erasure in the digital images provided on the NLW’s website, the hope was that some of what lay beneath them might be visible to the naked eye either under natural or ultraviolet light.

This is how we came to be standing in the dark room, carefully wedging ourselves over the book but out of the way of the beam shining purple from the UV lamp.  Turning the pages, some scraps of text and bits of annotation – the work of readers primarily of the fifteenth or sixteenth century – would make themselves visible, but individually these were not terribly remarkable; rather, as a group they add to a picture of the Black Book which might have been in wider circulation than previously thought.  And then we saw the faces.


My gaze had rested on the two sets of eyes staring up from the bottom margin of the page when Paul asked, ‘Is that what I think I’m seeing?’.  They had a creepy look about them, glowing as they did under the ultraviolet light, but they also possessed a charm that would only grow as we eventually deciphered the accompanying text, serch a chariad at vy anhrydyddusaf gar (‘affection and love to my most honourable kinsman’).  On the basis of the script, the inscription appears to have been made in the fourteenth or fifteenth century, somewhat on the earlier side of the erased marginalia.  There is inherent interest in this text and its implications for the manuscript, but our immediate excitement (and, we would later come to find, the excitement of others) was centred on the faces.


We were not expecting to find images.  Although the scribe of the Black Book included some of his own drawings in his work, images are relatively rare in Medieval Welsh manuscripts.  Since the story broke, however, a couple of people have pointed out other instances of faint or faded marginal figures in Welsh manuscripts that have been recovered in the last decade or so through the use of modern imaging and digital enhancement.  The accumulation of these discoveries begins to hint at what else might be concealed in the margins, and demonstrates what is possible both with the use of new technologies and, sometimes, simply by ‘minding the gaps’.


It was a year and a half later, back in Cambridge, that Paul and I were seated in his office with Stuart Roberts from the University’s Communications Office; Paul had floated them the idea of running a piece on new discoveries in a 750-year-old book, and they were interested.  Craning over facsimiles and images on Paul’s computer, we talked Stuart through what would be the stars of our upcoming lecture at the NLW: an entire page of erased thirteenth or fourteenth century verse that I had partially recovered using image editing software, and, of course, the faces.  This would be the first of a few meetings and many emails as Stuart developed the story, which was to be released in conjunction with press from the NLW ahead of the lecture.  The hope was that it might also be picked up by another news outlet or two, bringing not only an awareness of the Black Book and these particular finds to a wider audience, but also hopefully drawing attention to the importance of this type of research. The fear was that, with the impending press release shaping up to go out on April 1st there would be a not-so-comical misinterpretation that this was all an April Fools’ joke.

Having now been published – either digitally or in print – in twenty-eight countries and in twenty-one different languages (that I am aware of), the story was, by and large, not mistaken for an April Fools’ joke.  It was interesting, however, to watch it grow and change and take on a bit of a life of its own as it spread from outlet to outlet. Like a game of telephone, elements of the story would become blurred; how many poems were discovered and where (one or two, filled into a blank verso), and the relationship of the faces to the verse (none), sometimes became less clear the more distant a given report was from one of the original sources. Titles containing the adjective ‘ghostly’ began to appear with increasing frequency, culminating perhaps in the sensationalist headline from the Daily Mail, ‘Thebook of GHOSTS: Eerie faces and messages discovered in ancient medievalmanuscript of King Arthur and Merlin’.  Indeed, Arthur’s name was invoked a number of times (‘“Ghosts of Camelot” Arthur, Merlin found in ancient “Black Book”’, insisted the Bayou Buzz of Louisiana), and a small subset of readers went one step further and on their own websites and blogs began circulating the idea that the faces were in fact extraterrestrial (one youtube video on this topic has even garnered over one thousand six hundred more views than its counterpart for the popular yoda-in-a-medieval-manuscript story). It was an odd feeling to see this happen – aliens were certainly not anything I ever expected to appear in conjunction with my research – but despite the discomfort caused by some of the more minor inaccuracies or misrepresentations, it was an extremely gratifying experience to see that people were interested. They were interested in France, Germany and Spain, and farther afield in China, Brazil and India. They were even interested in my own home town.

The way in which the story spread may be indicative of heightened pop-cultural enthusiasm for things medieval; the recent success of television programmes such as Game of Thrones and Vikings are surely signs of this, and ITV must be hoping that it doesn’t abate any time soon as they enter production for their small-screen adaptation of Beowulf. Stories similar to my own, however, demonstrate that this enthusiasm is not restricted to the medieval period simply as a realm for fantasy. On the same day that the news of the Black Book broke, another (non-April Fools’) story was run about a medieval graveyard found under the grounds of St John’s College, Cambridge; this too spread over Britain and across the Atlantic. At about the same time, the report of an Anglo-Saxon remedy capable of curing MRSA was making the rounds.

Hopefully, the interest generated by the Black Book research may also be indicative of a rising profile for the digital humanities and the fantastic outcomes that can be achieved by applying modern technology to the study of the past. One of my favourite pieces of coverage of the Black Book discoveries appeared on the US science and sci-fi blog io9, but it is not so much for the article itself that I prefer this piece as it is for the comments. There, I could read as people discussed, questioned and joked about both the findings and the Black Book more generally, and extraordinarily, nestled among the posts one commenter had added three pictures of his or her favourite manuscript: the Cambridge Juvencus (MS Ff.4.42). That manuscript had only gone online on the Cambridge Digital Library at the end of March, and yet there they were, images from the digitisation in a post from April 4th. It was striking to see how quickly these images could and had been shared across the globe, and examples such as this demonstrate the importance of continuing to make these texts available online.

On a more personal level, this whole experience has been as surreal as first seeing those eyes staring up and out of the vellum. I never thought I would be talking to the Washington Post about my research, nor could I imagine that part of it would inspire the composition of a poem by a winner of the bardic chair at the Welsh National Eisteddfod. Now that some time has passed, however, I have been able to take everything in and to appreciate the impact that the story has had, not only in terms of the promotion of this type of study, but also on my research and on myself. The experience has been one of the highlights of my academic career thus far, and has given me tools which I can only hope to have need of again some day. In the end, I am glad that they didn’t forget. 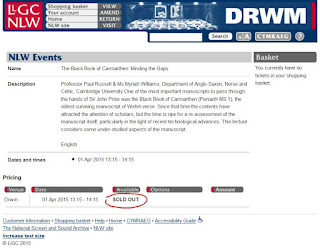