Report: Communication and Cultural Contacts in the North Atlantic Community

On 2nd March, the Department of Anglo-Saxon, Norse and Celtic hosted a seminar entitled ‘Communication and Cultural Contacts in the North Atlantic Community’. Held in St John’s College, this lively and intellectually stimulating event focused on the related topics of medieval commerce and the economy within this geographical area. The seminar also touched on many other forms of exchange, including cultural, intellectual, familial and political ties between the lands joined together by the North Atlantic waters. Ranging from the actual process of trade and use of currency to how crafts and ideas travelled, to the memory of specific events and preservation of literary and historical traditions, this day presented much food for thought and presented many useful insights, while at the same time highlighting how much work still needs to be done in these areas.

The event was divided into two parts. In the morning, four speakers gave 45-minute talks on different aspects of contacts in this region. The day kicked off with a presentation by Andy Woods, from the Department of Archaeology at the University of Cambridge, on ‘An economy of scale? Considering the volume and use of coinage in Ireland c. 995 -1170’. Andy presented his work on coinage in Ireland and demonstrated how it was possible to make fruitful comparisons between Dublin and many other commercial centres in the North Atlantic world in the medieval period. As well as showing the considerable variation in Ireland’s use of coinage both regionally and chronologically, this paper answered old queries and raised new questions on the nature of currency in Ireland. Dr Colmán Etchingham of the National University of Ireland, Maynooth, was the next speaker of the morning and presented a paper entitled ‘The myth of the Irish monastic town’, in which he revisited a topic which he has discussed in other publications, including in his Kathleen Hughes Memorial Lecture at Cambridge in 2010.  Dr. Etchingham provided further evidence in support of his argument that ecclesiastical centres in medieval Ireland did not function as commercial hubs. This included a very worthwhile investigation into the semantics of terms such as ‘óenach’ and ‘marggad’, which took account of the sources in which they appear. 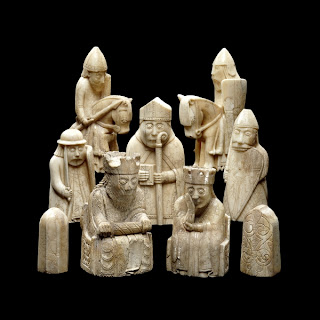 The Lewis Chessmen, image © Trustees of the British Museum

After a short tea break, the third speaker of the morning, Dr Alex Woolf of the University of St Andrews, discussed ‘The bishops in the Lewis chess sets’ and looked in particular at the question of provenance of these famous pieces. This paper also considered the identity of the craftsman who made such pieces as well as other high-quality goods and how the basic materials for manufacture were obtained. The morning was rounded off with a lecture by Professor Helgi Þorláksson, from the University of Iceland, on ‘Between Oddi and the Orkneys: on Icelandic Orcadian connections, c. 1180-1240’. Professor Þorláksson examined the complex relationships between families in these areas and how much insight could be gained from the extant sources regarding their relationships.

In the afternoon, a text seminar was held to investigate three primary texts which had been circulated prior to the seminar. This discussion was led by Dr Máire Ní Mhaonaigh and Dr Elizabeth Ashman Rowe of the Department of ASNC and Dr Svanhildur Óskarsdóttir of the University of Iceland. Dr Rowe introduced a text entitled ‘Gísls þáttr Illugasonar’ in which an Icelander, Gísl, comes to the court of the Irish king Muirchertach as a hostage. Dr Ní Mhaonaigh and Dr Óskarsdóttir presented the Irish text ‘Cogadh Gáedhel re Gallaibh’ and the Icelandic text ‘Njáls saga’ and examined how these texts represented the battle of Clontarf. These two sessions proved how bringing together experts from multiple disciplines to examine textual traditions can provide new insights into the material and help elucidate difficult textual quandaries. The discussion covered a range of topics, including the way in which the Irish language was portrayed in ‘Gísls þáttr Illugasonar’ and the transmission of material about specific events and wider culture phenomena between Ireland and the Norse-speaking world.

This seminar was attended by many of the members of the Faculty from the Department of ASNC, several distinguished speakers and visiting academics, as well as post-graduates and students.  This event was an excellent example of how interdisciplinary approaches can hugely benefit research and present new findings. I’m sure that much of what was discussed at this seminar will go on to influence many of the attendees’ work and it is hoped that the many fruitful discourses that began at this seminar will continue for some time to come!
Posted by Anglo-Saxon, Norse, and Celtic at 01:32