Irish Songs from Connemara: A Concert by Saileog Ní Cheannabháin

The Department of Anglo-Saxon, Norse and Celtic was honoured and delighted to welcome the Irish singer Saileog Ní Cheannabháin, who performed a selection of songs from the Connemara Gaeltacht in a traditional style of singing known as sean-nós (‘old-style’). The concert took place in the ASNC Common Room before an attentive and appreciative audience, which included students, faculty, staff, ASNC alumni and members of the Cambridge community. The Common Room was filled to capacity, but there was absolute silence as Ní Cheannabháin captivated listeners throughout her memorable and moving performance. The songs were sung in Irish, and Ní Cheannabháin conveyed the thematic range of sean-nós singing in a selection of Irish laments and love songs, witty verses reputedly composed by a local poet and the enchantments of Seachrán Sí ‘The Fairy Wandering’, a song included in the recent publication The Otherworld: Music and Song from Irish tradition (Dublin, 2012). Ní Cheannabháin concluded the concert by inviting members of the audience to join in singing the refrain of Bean Pháidín ‘Páidín’s Wife’ and Na Ceannabháin Bhána ‘The fair Canavans’, songs well-known in Connemara. Inspired by her beautifully articulated performance, the audience sang (in Irish) in full voice. 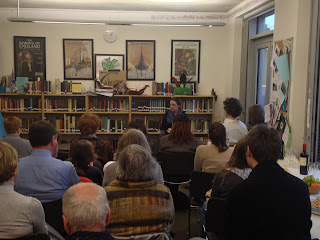 The concert included versions of several songs from a region of Connemara known as Iorras Aithneach. Ní Cheannabháin has been influenced by singers from this region (among them, her father, Peadair Ó Ceannabháin), and yet her sean-nós style is very much her own. She was awarded the Seán Ó Riada Prize from the Department of Music at University College Cork (2009) for her study of the songs and singers from Iorras Aithneach. Consulting original manuscripts housed in University College Dublin (Ionad Uí Dhuilearga), Ní Cheannabháin researched songs which the Irish musician Séamas Ennis collected in Iorras Aithneach between the years 1942-45, many of which had since disappeared from the local repertoire. With the aim of bringing these songs back into the living tradition, Ní Cheannabháin recovered lyrics and tunes from various manuscripts, interpreted the ornamentations noted by Ennis, and arranged and recorded several of these rare songs on the recently produced CD I bhfíor-dheiriú oídhche. 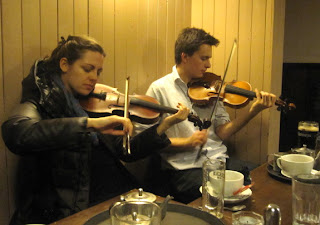 Saileog and Andrea in the Red Bull after the performance (photo: Dr Margo Griffin-Wilson)

Saileog Ní Cheannabháin has made a significant contribution to the Irish song tradition, and the ASNC Department extends its thanks and appreciation for a wonderful concert. It is particularly appropriate to commend the work of this young, talented musician during the weeks of Seachtain na Gaeilge (4-17 March), an international celebration of Irish language and culture. Thanks are also extended to ASNC Modern Irish student Andrea Palandri, who helped to bring Saileog Ní Cheannabháin to Cambridge University, Dr Elizabeth Ashman Rowe, Fellow of Clare Hall, who kindly assisted with arrangements, and Charlotte Watkinson, Secretary of the ASNC Department, who offered generous assistance throughout the event. The concert was organized by Dr Margo Griffin-Wilson, Teaching Associate in Modern Irish. The Modern Irish Language courses and cultural events have been supported by a generous grant from the Irish Government.