The Department of Anglo-Saxon, Norse & Celtic continues to be very proud of its association with the Sutton Trust, a philanthropic organisation which seeks to promote social mobility through education. Each year we host a Sutton Trust Summer School in ASNC for a small group of talented young people, from non-privileged backgrounds, who are about to begin their final year of school. The purpose of the Summer School is to allow them to experience university life, attending a range of lectures, seminars and classes on all aspects of the ASNC undergraduate course: from Anglo-Saxon history to Old Norse literature, from palaeography to medieval Welsh law. This year we welcomed eleven teenagers from a wide geographical area, including students from Wales, Yorkshire and London, all of whom were bright, enthusiastic and willing to sacrifice a week of their summer holiday in order to learn about all things medieval. 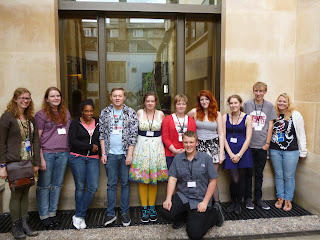 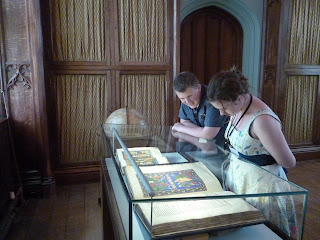 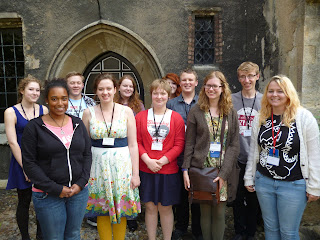 In Old Court, Corpus Christi College
Participants also had the opportunity to experience a supervision, the small-group teaching which is characteristic of Oxford and Cambridge. Each of them had chosen the topic in which they were most interested, and were supervised individually or in pairs by doctoral students and early career researchers in the ASNC department. 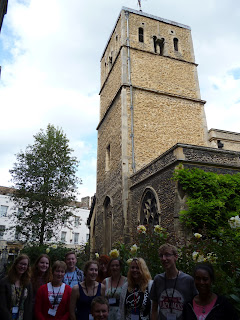 Finding Anglo-Saxon things to stand in front of ...
During the Summer School the students stayed at St John's College, and were able to indulge in typical Cambridge activities, such as punting on the river and attending a 'formal hall' dinner. We hope very much that this week will inspire them to apply to elite universities, such as Cambridge, for their undergraduate studies. 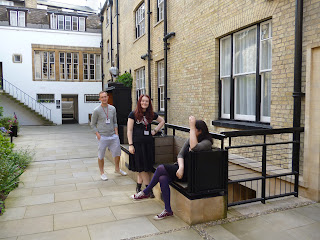 And, despite the fact that most of the students had never studied a word of Latin before they arrived on the course, the expert teaching of Dr Rosalind Love ensured that, by the time of the disco on the last night of the Summer School, they were all able to get into trouble for swearing profusely in Insular Latin. No matter what the participants go on to do in life, that is one invaluable skill which will always stay with them.
Posted by Anglo-Saxon, Norse, and Celtic at 03:33