Adventures in a graveyard, Part 2

Following my adventure in search of the memorial cross erected at St Fintan's church, Sutton, Co. Dublin, to the Celtic scholar, Whitley Stokes (1830-1909), I decided to find the place where he is actually buried, in Paddington Old Cemetery, London. I was particularly interested to see whether his gravestone was similar in style, or whether it bore a similar inscription, to the cross at St Fintan's. 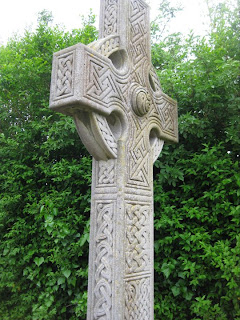 Stokes' memorial cross at St Fintan's, Sutton, Co. Dublin
Paddington Old Cemetery is located in the diverse district of Kilburn, north of Kensington (where Stokes lived after returning from India in 1882 until his death in 1909). 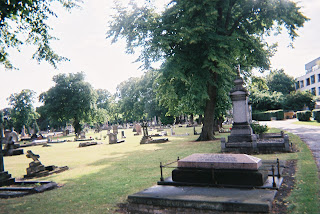 Paddington Old Cemetery, London
I found Stokes' grave in somewhat better condition than some of the others in its vicinity. The cross was indeed in the Celtic Revival style, although notably less ornate than the memorial cross at Sutton. 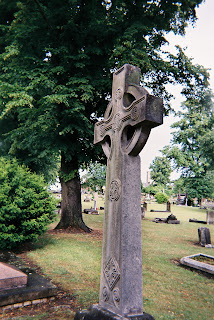 grave of Whitley Stokes (1830-1909), Paddington Old Cemetery
The inscription was also quite different from that at St Fintan's. First, there was no indication of Stokes' profession or scholarly interests.Where the St Fintan's cross had described him as 'Jurist, Scholar and Philologist', his London gravestone gave only the spare details of his name and dates, reflecting perhaps the more private, family-oriented nature of the memorial, as opposed to the more public, or scholarly, nature of the Sutton cross. The quotation chosen for the inscription was also quite different in tone. Where the St Fintan's cross stated: 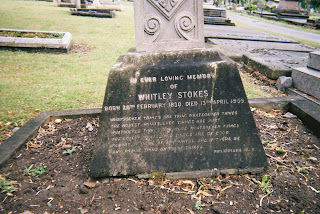 Stokes grave inscription
The overall effect was simple, but quite moving, and in striking contrast to the form and content of the St Fintan's memorial.  But having found Stokes' grave I decided that the next challenge would be to find his house. So I left Kilburn, and set off towards one of London's most affluent districts: 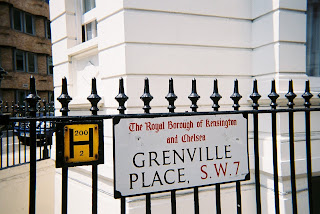 Grenville Place, Kensington
Perhaps rather fittingly, Stokes' home at 15 Grenville Place technically no longer exists, since 14 and 15 Grenville Place have been knocked together and turned into separate flats. However, the house still retains the impressive frontage, including the front door (no longer in use), which it would have had in Stokes' day. 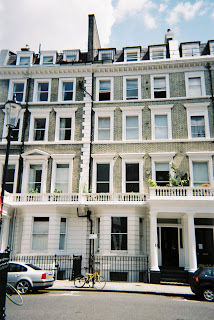 15 Grenville Place, Kensington, formerly the home of Whitley Stokes (1830-1909)
In Stokes' time, as now, this was a prosperous part of London, and emphasises the wealth which Stokes accumulated during his time as a colonial jurist in British India, where he became President of the India Law Commission. A stark contrast indeed to the penniless young barrister who had to sell his furniture in order to buy his passage to India in 1862, and a reminder of the more problematic moral complexities of the life of Ireland's greatest Celtic scholar.
Posted by Anglo-Saxon, Norse, and Celtic at 05:50