Adventures in a graveyard

In 2009, Dr Paul Russell and I held a conference in Cambridge to commemorate the centenary of the death of Whitley Stokes (1830-1909), colonial jurist and Celtic scholar. A volume arising from that conference is soon to be published by Four Courts Press, but my interest in Stokes has continued to grow, and last week it led me to a graveyard in Co. Dublin in search of a putative memorial cross which was apparently erected for Stokes shortly after his death.

Stokes, who was born in Dublin, left Ireland in 1852, at the age of twenty-two, when he went to study law in London. Although he returned to Ireland for brief visits, he never again lived there, instead travelling to India in 1862, where he spent twenty years in Calcutta and Simla, codifying Anglo-Indian law, eventually becoming President of the India Law Commission. He returned to London in 1882, and spent the rest of his life there. He was a founding fellow of the British Academy. Stokes published prolifically on medieval Celtic languages and literatures, and it remains the case that many medieval Irish texts are only available in print in Stokes's editions and translations. Stokes died in 1909, and was buried in London.

However, according to the genealogical website of a Stokes family in Australia, a memorial cross had allegedly been erected at a "St Finian's" church on the Howth peninsula, in Co. Dublin. In following up this lead, I faced two problems: first, that this cross is not referred to anywhere in the scholarly literature (e.g. in the entries on Stokes in the Oxford Dictionary of National Biography, or the Dictionary of Irish Biography), and so I had no more specific information to go on than one brief remark on a single website; and second, that there is no "St Finian's" church on the Howth peninsula.

It seemed most likely to me that "St Finian's" was a misreading of St Fintan's, a church located in Sutton, close to Howth, and which dates back to the early medieval period (fitting for a scholar such as Stokes, with his interest in the culture of early medieval Ireland). So, on a drizzly, overcast Thursday, I took the DART from central Dublin to Sutton, and wandered through the graveyard in search of a cross which I wasn't sure even existed. 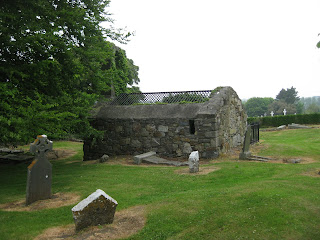 After some time, I came across a memorial cross for Stokes's brother, Sir William Stokes, a noted surgeon who died in South Africa: 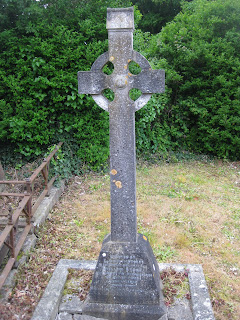 Memorial for Sir William Stokes (1839-1900), with the graves of his wife and daughter
Realising that I must be on the right track, I looked at an elaborate cross nearby, in the Celtic Revival style, and located just behind that of William Stokes. Sure enough, it was the memorial cross erected for Whitley Stokes: 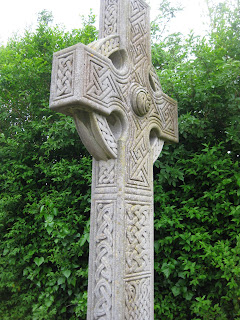 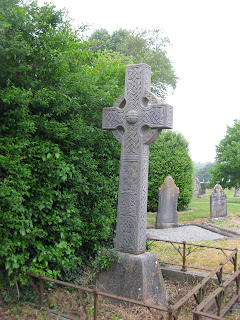 Memorial cross for Whitley Stokes (1830-1909), St Fintan's, Sutton
In addition to the ornate decoration on the cross itself, there is an inscription on its base, which reads:
IN MEMORY OF WHITLEY STOKES
SOMETIME LEGAL MEMBER OF COUNCIL OF INDIA
JURIST, SCHOLAR AND PHILOLOGIST
FOREIGN ASSOCIATE OF THE INSTITUTE OF FRANCE
BORN 28 FEBRUARY 1830, DIED 13 APRIL 1909
BURIED IN LONDON
DIE WAHRHEIT RUHT IN GOTT
UNS BLEIBT DAS FORSCHEN
The German quotation, from Johann von Müller, at the end of the inscription (which translates as 'Truth lies with God; for us remains Research'), is particularly fitting since Stokes himself quoted it in the seminal 'Miscellanea Celtica' study, in which Stokes published the work of his late friend, Rudolf Thomas Siegfried (1830-63), a talented philologist who had died prematurely. 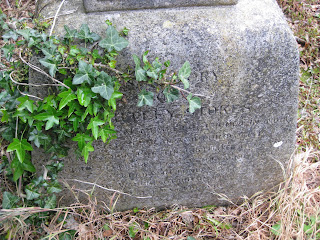 Base of Stokes' memorial cross, St Fintan's, Sutton
However, this was not my only discovery that day, and when I went over to examine the remains of the medieval church of St Fintan's I was surprised to find, only a few metres from the church, the grave of Whitley Stokes's sister, Margaret M'Nair Stokes (1832-1900), who was a respected art historian in her own right. Indeed, in the second half of the nineteenth century, Margaret Stokes was considered to be the leading authority on medieval Irish art and architecture. 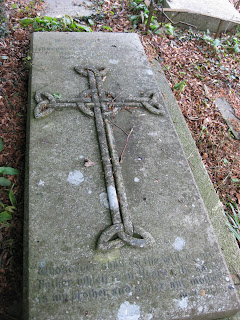 Grave of Margaret M'Nair Stokes (1832-1900), art historian
And so, in an elevated position overlooking Dublin Bay, the greatest philologist Ireland has ever produced, and the most significant Celtic scholar of the nineteenth century, has a fitting memorial, close to that of his surgeon brother, and the grave of his art historian sister, testimony to the wide-ranging talents and enduring legacy of one of Ireland's most prominent academic families.
Posted by Anglo-Saxon, Norse, and Celtic at 17:29