You will probably already be familiar with the Marvel Cinematic Universe, that is, the series of film adaptations of Marvel Comics superhero properties which began with 2008’s Iron Man and includes The Incredible Hulk, Iron Man 2, the forthcoming Captain America: The First Avenger and the subject of this review, Thor; a series that will culminate in 2012’s The Avengers, featuring all four superheroes. Created by Stan Lee, Larry Lieber and Jack Kirby in 1962, the Marvel Comics series Thor was always one of the more controversial comic books in the genre – just how tasteful was it to appropriate a bygone culture’s mythology and twist it to your own post-industrial, twentieth-century, Cold War-influenced, all-American ends? This is the question that Stan Lee did not ask himself when he decided to create the ultimate superhero: no more (near-)mortal beings with god-like powers, just an all-powerful god, pure and simple.

Consequently, Thor was always going to be the toughest Marvel Comics hero to translate to the big screen. The difficulty comes in trying to integrate a god into the technology-based, sci-fi world of Iron Man and the Hulk. So how do Marvel Studios get around this? Simple: Asgard becomes another dimension where science and magic are “one and the same” (to quote the script), with a portal gate at the end of the Rainbow Bridge that allows its inhabitants – styled ‘Asgardians’ in the film, not ‘Æsir’ – to travel to Earth. The gods are super-powered, yes, but the trick is to recast them as superhuman aliens, not as deities. For example, Thor has no discernable powers of his own except being extra-buff (much to the delight of female members of the audience) – his powers such as they are come from his hammer, Mjolnir (sic.). This isn’t true of all the Asgardians, most of whom are given their own personal skill, but for the most part they are nearly-plausible ‘scientific’ versions of the Norse gods rather than traditional comic book superheroes with impossible magic powers. Then there are the Frost Giants, who break this portrayal by being huge and able to freeze anything, as well as having monstrous guard dogs the size of Godzilla. Oh, well, we can’t have everything. 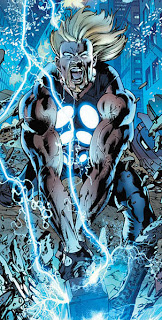 Marvel Comics' Thor (image from http://marvel.wikia.com/Thor_Odinson_%28Earth-1610%29)
So, to the story. Is it good? Well, it’s not bad. The premise is that Thor (Chris Hemsworth) is heir to the throne of Asgard, and extremely arrogant and irresponsible to boot. When he disobeys his father Odin’s (Anthony Hopkins) orders and attacks the Frost Giants, almost causing a full-scale war between them and Asgard, he is banished to Earth, where he is to be powerless until he can prove his worth. On Earth, he meets astrophysicist Jane Foster (Natalie Portman) who helps him survive in an unfamiliar world where he is not only unimportant, but also wanted by secret government agency SHIELD who have taken possession of Mjolnir, which was sent down to Earth separately from Thor. From there it’s a traditional journey of romance and redemption with all the action you’d expect from a summer blockbuster. The twist is the choice of Kenneth Branagh as director. Best known for his work adapting Shakespearian plays to the screen, his influence is most felt in the first portion of the film set in Asgard where the plot machinations are almost lifted wholesale from the Bard: the triangular relationship between Odin and his sons Thor and Loki reflects King Lear, Hamlet and Othello in its depiction of a jealous manipulator (Loki) exploiting the strained relationship between favourite-son (Thor) and father (Odin) for self-gain. This forms the dramatic core of the plot and is probably the most satisfying section of the film, reaching its climax with a spectacular assault by Thor, Loki, Sif and The Warriors Three (Asgardians invented for the comic) on Jotunheim, home of the Frost Giants. Once Thor is on Earth, it transforms into a fish-out-of-water comedy which is genuinely very good. This reflects arguably the film’s greatest strength: the realisation that all the Shakespearian drama in the world won’t engage the audience fully unless the inherent silliness of the scenario is acknowledged and embraced, but without sinking to Batman & Robin levels of self-parodic farce.

Branagh’s influence can also be seen in the casting. Australian actor Chris Hemsworth is excellent as the titular meat-headed lug with a big heart, showing a surprising gift for self-deprecating comedy in the earthbound sequences. Natalie Portman isn’t bad as the love interest, but her character is a classic Hollywood ‘glamorous female scientist’ cliché. She is upstaged by comedy sidekick Kat Dennings, who to be honest seems a much more appealing romantic interest than Portman: witty, smart, pretty… of all the (surprisingly numerous for a blockbuster) female characters in the film she comes off best. But I guess we can’t blame Thor for picking Natalie Portman – heck, she’s richer and has an Oscar. Tom Hiddleston gives the stand-out performance as Loki, one of recent cinema’s most complicated and sympathetic villains. An old theatre pal of Branagh, it’s clear that the director has a liking for Hiddleston, since Loki gets not only a lot of screen-time but also the best dramatic material with which to work. Anthony Hopkins gives a great turn as Odin, toning down his recent penchant for scenery-chewing in favour of a performance with gravitas instead of gravy. And what spectacular scenery it is. Asgard is simply one of the best alien worlds – sorry, dimensions – designed in recent cinema. My only gripe is that it’s too clean. Where are the cleaners? Where are the repair men? The place feels hardly lived in, which is a shame given it’s meant to be thousands of years old. This and the iffy green-screen work in Jotunheim spoil the illusion of Thor being more than a movie – a significant flaw since Branagh is clearly aiming for an epic drama with the scale and weight of Richard Donner’s Superman, the standard against which most comic book movies are measured, and still one of the best.

Where Thor really falls down is in its last half an hour. After what feels like lots of really good set-up for Thor learning his ways and thwarting Loki’s promised-to-be-evil plans, the audience is treated to a quick montage of Thor being nice to people, a half-hearted fight with a giant robot (The Destroyer, again a new creation for the comics) and a showdown with Loki that has a nice pay-off but reveals the villain’s Grand Plan and motivations to be… crap. To avoid spoilers I won’t say what it is, but honestly, what a letdown.

For the first time in a long while (painful memories of Pirates of the Caribbean: At World’s End coming to mind) I’m going to recommend that Thor needed to be longer and more complex. Thor’s emotional progressive from arrogant idiot to sensitive hero should be gradual and profound, but it’s over remarkably quickly. Similarly, the romance between Jane Foster and Thor is under-developed. Although I personally found the story’s suggestion that two people (or a god and a person) can be strongly physically attracted to each other without all the emotional baggage of ‘it’s what’s inside that counts’ quite refreshing, the climactic devotion they express to each other is unconvincing. As such, Thor ultimately feels superfluous and lightweight despite its promising start. An entertaining night out at the cinema? Yes. An immediate entry into a viewer’s ‘favourite films’ list, that will last in the memory? No.

Now for the big question: is Thor a respectful appropriation of Norse mythology, or an unholy bastardisation of everything that is precious about pre-Christian Scandinavian religious culture? Before answering, I must admit that I know next to nothing about Norse mythology. I read the Edda once three years ago and haven’t looked back. So, in my less-than-expert opinion, I have to say that Thor is a respectful appropriation of Norse mythology. The advantage the filmmakers had was the ability to sift through fifty years of comic books as well as genuine Norse tradition (what has survived of it, anyway) from one thousand years ago and pick and choose the best stuff. Read the comics and the first thing you’ll notice is the daft costumes and the Shakespearian-like dialogue (“because it sounded archaic”, explained Stan Lee). Then you’ll notice the really sci-fi elements, with spaceships, green aliens and X-Men all co-existing alongside our favourite Asgardians. Then you’ll notice that, like most Marvel Comics, the stories are actually terrible. The film spares us these cheesy ingredients, instead giving us a more accessible and slightly less ridiculous version of the comics, while remaining true to the characterisations of the gods from Norse tradition. There are a fair few changes: Sif is now a dark-haired warrior-type; Thor is blond, not red-haired; Loki isn’t mischievous so much as evil; Odin is now Loki’s father; new Asgardians are created while characters from the original tradition aren’t featured... I’m sure there are many more, but I can’t be bothered to list them. But if you can accept the alt-reality sci-fi premise of Asgard being just another dimension home to a civilisation light-years ahead of our own, you shouldn’t have a problem with these changes. Yes, I agree that it’s a shame to transform Norse mythology into a tongue-in-cheek sci-fi epic with Shakespearian aspirations instead of actually film the damned original stories, but that’s comic books for you. And the key thing to remember is that Thor is an adaptation of those comic books. I can only be thankful that the film isn’t as bad as its source material.
Posted by Anglo-Saxon, Norse, and Celtic at 07:40