One of my current research projects has to do with a legendary Viking named Ragnar Loðbrók. His nickname means ‘Shaggy Breeches’, and my husband likes to refer to him as ‘Ragnar Shaggy-Pants’. According to Ragnar’s saga (here illustrated by Niels Skovgaard), Ragnar got his nickname from the time that he killed a serpent, protected from the monster’s venom by a suit of fur clothing dipped in tar. As you might expect, by killing the serpent he won the hand of the lovely Thora. The story of Ragnar was very popular in Iceland in the Middle Ages, and Ragnar was believed to have been a real person, and even the ancestor of certain Icelanders. My project is to survey these references to Ragnar and to investigate what he meant to different authors. So far it appears that Ragnar was quite a malleable character. He could be the ancestor of the royal houses of Norway, Sweden and Denmark, or he could be the representative of the evils of the pagan age, before Christianity came to Scandinavia. The author of Njal’s Saga uses Ragnar to establish that some Icelanders come from a noble background, in contrast to the author of Egil’s Saga, which uses Ragnar to symbolize the old order in Norway, which the new order of Iceland sets itself up against. Significantly, there is no text in Old Norse that lists all the descendants that have been attributed to Ragnar, or that showed Ragnarr as the father of Icelandic settlers and of Norwegian, Danish, and Swedish kings. Evidently the ease with which his legend could be adapted led to such a proliferation of material that later Icelanders were unwilling to deal with it all – but I am. 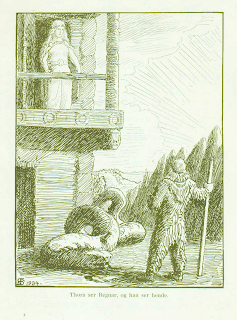 (The caption of the illustration says ‘Thora sees Ragnar, and he sees her.’)
Posted by Anglo-Saxon, Norse, and Celtic at 03:03