Film Review: or, why ASNC is good (or possibly bad) for your health

It might have been a mistake, but a friend dragged me to see Russell Crowe as Robin Hood recently. She loved it. As an ex-mediaeval historian I had a few more problems: specifically my blood pressure. I know it was set just outside ASNaC’s jurisdiction, but there’s definitely some transferable knowledge.

Now, I understand that they almost certainly had an historical consultant – after all they did get right the fact that chain mail weighs a tonne. Well, okay, maybe three stone, as if you were running around all day with a small child strapped to your back. Robin has to ask Marian to help him off with it before he can bathe. The fact that later in the film Cate Blanchett, a twig of a woman who has most certainly not spent years growing used to the weight, manages to turn up to battle in full chainmail and then fight – hey, I’m not even going to go there. Some romantic licence must be allowed. 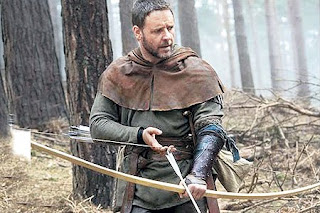 Russell Crowe as Robin Hood
So they almost certainly did have an historical consultant, even if they did ignore eighty, eighty-five per cent of what s/he said. Let’s not go into calling the king ‘Your Majesty’ 350 years early, burning a body instead of burying it, wielding a broadsword one-handed, or the boats which needed another 500 years to be invented. I did have an actual head-slapping moment when King John refused to sign the Magna Carta, because, actually, in fact, sorry, he DID ACTUALLY SIGN! The woman sitting next to me looked a bit startled.


But only a bit, because I’d already sat up, raised my hands and gone ‘What?!’ about twenty minutes earlier, when the army Robin and the Barons had raised to fight off the invading French (!) managed to get from the Chilterns to the White Cliffs of Dover in a very short space of time, galloping their poor horses all the way. Those horses must have been knackered. Because it wasn’t even the mediaeval historian in me that was really cross – it was the bit of me that wondered why the producers hadn’t even bothered to buy a simple thing that could have made a real difference – a map.

Peterborough: hate to break it to you – not a city in the north. Also if you’re going to ride around the Northern cities pillaging and burning, you probably want to do it in a logical order. One that doesn’t involve riding backwards and forwards across the top of the country in a highly wasteful way. But then, I guess if you’ve invented time travel then you can afford to waste time and energy riding from Peterborough up to York and back down to Nottingham before nipping to Barnsley - we know they have time travel because they managed to burn the stone Minster in York about a hundred and fifty years before work began on it.

But it was afterwards, outside, as I ranted and raved to my friend that something occurred to me. “I’m glad I didn’t do ASNaC,” she said. “I really enjoyed that film.” But so did I – and the only reason for it was the blood pressure hikes caused by my ASNaC sensibilities. Because frankly, in the bits I wasn’t getting angry, I was getting bored. And let’s face it, it’s not every time a trip to the cinema turns into a full cardio workout. So there you have it. ASNaC is good for your health.
Posted by Anglo-Saxon, Norse, and Celtic at 08:01