Yesterday I had the pleasure of meeting pupils from the City of London Academy – Islington and the Central Foundation Boys’ School who came to Corpus Christi College to find out about university life, and about applying to study at Cambridge. After a series of events and lunch organised by Corpus's Admissions Tutor, Dr Melanie Taylor, I had the opportunity to offer pupils a taster lecture, so that they could experience one of the more unusual subjects one can study at Cambridge, namely Anglo-Saxon, Norse & Celtic. 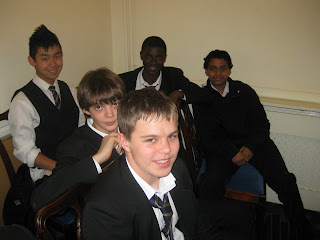 Some of the wonderful pupils from the Central Foundation Boys' School
We discussed some ideas about 'translation', and how the act of translating an historical source can break down barriers, both linguistic and cultural, and shed new light on the past. But we also talked about the way one chooses to translate a text, and how that can open up the text to new audiences (both Ciaran Carson's translation of The Táin [Penguin: 2007] and Seamus Heaney's translation of Beowulf [Faber & Faber: 2002] are good examples of this). 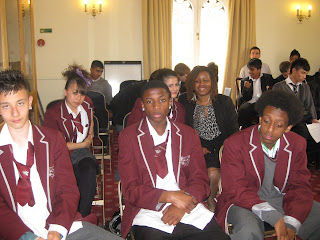 This talented bunch of pupils then worked together to create a modern-day reworking of the eleventh-century fíanaigecht text, Cath Cnucha. Developing the idea that the fían was the medieval Irish version of the modern-day gang, the pupils re-wrote the story of Cath Cnucha in twenty-first century slang. Their sparkling (and witty) adaptation can be read in full here:


Murni was Tadhg’s hot daughter. Bare men wanted her. Cumall was the head of a gang’s son and tried to get it on with Murni, but he got rejected. So Cumall raped her. 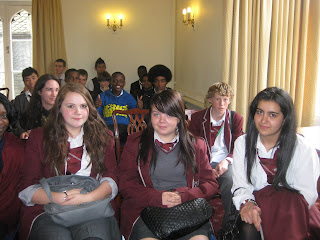 Murni’s dad went to Cond. He was pissed off when he was told what had happened. Cond gave Cumall a choice by saying you either leave – fall back – or bring Tadhg’s daughter back. Cumall said I’ll give everything but the girl. Cond sent his boys to beat up Cumall. 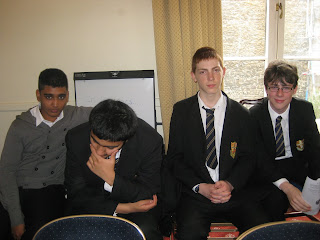 Cumall got his mandems, they ‘ad beef ting. My guy got decked, and his guys got merked. Goll was pissed; his eye was doost. This is why my guy was tagged one-eye.

After that, Murni went to Cond for back-up coz her Dad kicked her out, coz she was pregnant. Then her Dad told his boys to burn her. But he was too shook of Cond. Cond then sent Murni to a friend’s yard, just in case init. She jammed there until she had a baby boy, Finn. Finn grew up there, until he was old enough to run tings, against anyone who was waste.[1]

Finn went to Tadhg, his marge’s papz. And said come on let’s get it cracking, one on one, or a rumble. Or you give me some cake for my dead dad. They made a decision, and Tadhg said low it, u can have my ends. Finn made that his main crib. And Finn gave some gwap to his boy Goll cos he only one eye init. It was all bless, until beef started over some animal. 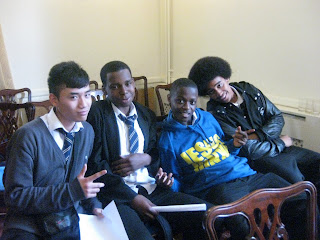 Literary talent from the Central Foundation Boys' School
I would like to thank all the pupils and teachers from the City of London Academy - Islington and the Central Foundation Boys' School for bringing their creativity and talent to the project of reviving the fíanaigecht genre, and particularly to those who bravely and enthusiastically got up in front of their peers to offer their unique and energetic performance of their new translation.

[1] Alternative recension: ‘Next yeah, Murni went to Cond to get boys, but her father dissed her, not let her come back yard coz she got bowned. Her dad called her a sket; told his guys to light her. Cond sent Murni to his friends’ hideout. She jammed at her mate’s yard till she gave birth. Finn, the baby, grew up until he was old enough to cause beef.’
Posted by Anglo-Saxon, Norse, and Celtic at 02:56