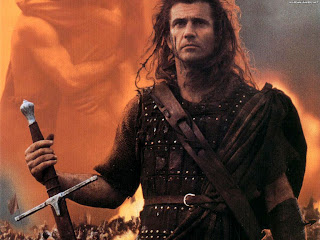 Nevertheless, it is to be hoped that Gibson's film will be an improvement on Hollywood's recent 'Viking' offerings, Pathfinder and Outlander. And while the effect of Holywood blockbusters such as Gladiator and (whisper it) Lord of the Rings on university applications has not yet been studied, it is also to be hoped that Gibson's Viking movie might engender some interest in medieval English and Scandinavian language and culture. Surely that would be worth overlooking the odd anachronism for? Just as long as there are no horned helmets ...

Incidentally, this film seems to have taken the place of two other Anglo-Saxon, Norse & Celtic-related film projects that have been mooted in recent years. Leonardo DiCaprio had been slated to play Irish king Brian Boru in Freedom within the Heart (co-starring Vinnie Jones), but this seems to have died in development, as has Last Battle Dreamer, supposed to feature Sean Bean as the ninth-century Viking Hakon, Ryan Philippe as his brother Thorfinn and Abbie Cornish as Thorfinn's Anglo-Saxon love interest.
Posted by Anglo-Saxon, Norse, and Celtic at 06:36