The annual graduate-led conference, Cambridge Colloquium in Anglo-Saxon, Norse and Celtic, took place in the English Faculty on the 15th of February, 2014. The theme of this year’s conference was Evidence of Corruption/Corruption of Evidence, and we welcomed Dr Oliver Padel as our keynote speaker, with student speakers coming from as far afield as Iceland, Ireland and L.A.

Despite the potential implications of the theme, the papers were cohesive and comprehensive. The tone for the day was set by the keynote lecture, which addressed the crucial question of ‘What is corruption?’ Dr Padel presented us with evidence of place-name change and discussed the nature of these changes, taking us through the process of differentiating between different types of evidence, and deciding what constitutes corruption. Although his paper was specifically concerned with place-names, Dr Padel raised some important questions that were returned to throughout the day.

Our first student session of the day was centred on corruption of a different nature, namely, the monstrous. Both Camilla Pedersen and Rebecca Merkelbach discussed societal conceptions of monstrosity, and the types of corruption within societal constructs or within oneself that can lead to an outcast status. Pedersen, who travelled over from the National University of Ireland, Maynooth, was focussed on the medieval literatures of Iceland and Ireland, taking a comparative approach to the depictions of shape-shifting in these two cultures. Merkelbach, an ASNC student, on the other hand, explained that monstrosity in the Sagas of the Icelanders is a social perception, and she presented us with a scale that she had developed to illustrate this concept.


Having learned that the claws of literary monstrosity are conceptual, we moved on to a more physical form of corruption, that of manuscripts. Our first paper of the session, presented by Simon Thomson of UCL, sought to question our understanding of the Beowulf manuscript. He identified several codes which he suggested communicated aspects of the text to the reader now lost to the inattentive eye. Ben Guy, ASNC, analysed the Harley Manuscript 3859, a very important document for the history of Medieval Wales as it is often considered to be the only witness to some of the historical materials from which it was formed at the scriptorium of St David’s. By comparing this manuscript with some later genealogical tracts, however, Guy argued that there is evidence for a second witness to the St David’s collection, and secondarily that, if accepted, this would demonstrate a few instances of corruption in the Harley manuscript.


After our intellectual appetites were sated, we adjourned for a lovely lunch before returning for our fourth session. The focus of this session was the editing of the past for contemporary consumption. Daisy Le Helloco, from Bangor University, addressed changing antiquarian interests in the editing of Gildas’ De Excidio et Conquestu Brittaniae. In line with the medieval author of the text, who composed his history with his own agenda in mind, so too did the earliest editors of the work. Rosie Bonté, ASNC, focussed on the presentation of the conversion of Orkney from paganism to Christianity in Orkneyingasaga. Bonte argued that the presentation of Orkney's conversion in Orkneyingasaga reflects Icelandic anxiety over the encroaching power of the Norwegian king in the second half of the thirteenth century. The final presentation of the session was given by Dale Kedwards of the University of York. In his paper, Kedwards discussed evidence of corruption in two world maps preserved in an Icelandic manuscript of the thirteenth century, which he proposed had been manipulated, with the unintended effect of disassociating the principal winds and the cardinal directions.

In the final session of the conference, we welcomed Rebecca Hill of the University of California, Los Angeles, and David Callander, ASNC. Hill explored the various approaches of translators to filling in the lost lines of the Old English poem, ‘The Husband’s Message’. She surveyed modern translations of the poem to establish to what extent the Old English metre was reproduced by comparing the translation of the extant text with the modern reconstructions of what might once have been in the gap. David Callander gave the final paper of the day, questioning the relationship between Old English and Medieval Welsh elegies. Using extracts from some of the texts in question, he explored the reasons why scholars have traditionally had a tendency to compare these two literatures, but then by examining a sample of their apparently shared motifs, he highlighted the differences between them.

After a quick fortifying pint and continued academic discussion, the day’s festivities were concluded in with a feast in Newnham College. While the beautiful hall may have reflected a somewhat later style, guest were arranged along an expansive central table fit for any medieval dinner; mead-horn not included. Though we were able to thank our guests and conference attendees then and there, it bears repeating that we are extremely grateful to all of those speakers, volunteers and committee members who gave their time and energy to make it such a productive and enjoyable day. We hope you had as much fun with corruption as we did. 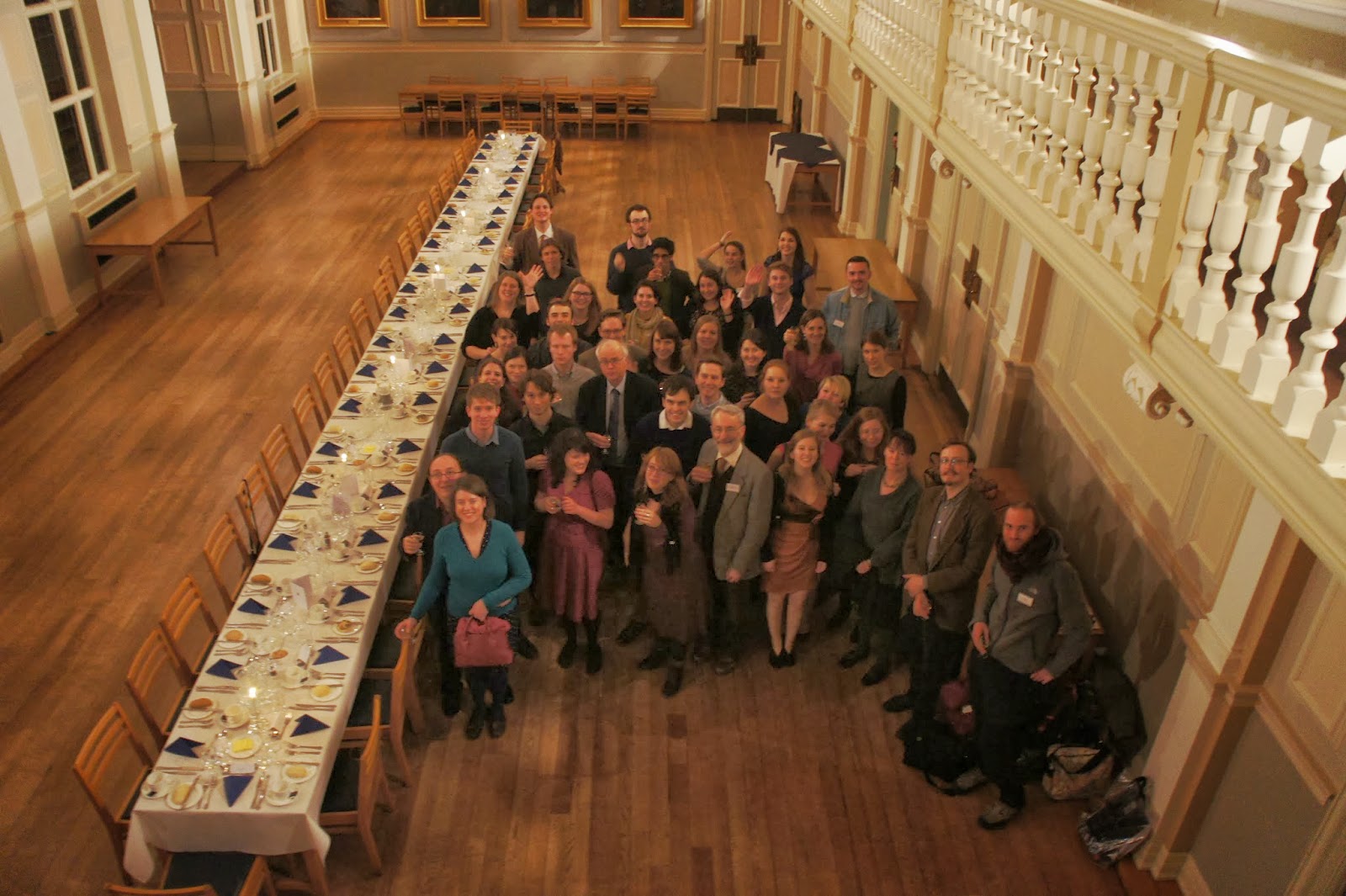 Thanks to Myriah Williams and Eleanor Heans-Glogowska for this report.
Posted by Unknown at 03:29