On Saturday, the 26th of October the Department of Anglo-Saxon, Norse and Celtic participated in the University of Cambridge's Festival of Ideas, an event held annually since 2008 designed to encourage the community and anyone with an interest in Cambridge’s work and research in the Arts, Humanities and Social Sciences, to come over, check us out and meet the faculty and students. 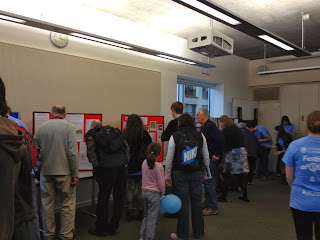 Several events were held within our department on the Saturday, with two well-attended lectures by faculty members Dr Richard Dance and Prof Simon Keynes, speaking on ‘Frontiers in Anglo-Saxon England’, on the Tuesday following.  The majority of Saturday's events, organized under the theme ‘Beyond Borders: Exploring the Anglo-Saxon, Norse and Celtic Worlds’, were run by graduate students, led by Christine Voth.  Upstairs in the department itself, attendees could enjoy a re-enactment of Groenlendinga saga, have a look at the work being carried out by the Orkney Project, or, for the young (and young at heart), there was a colouring session where future ASNCs were invited to hone their artistic skills with a variety of Anglo-Saxon, Norse and Celtic art, or to try their hand at the runic and Ogham scripts. 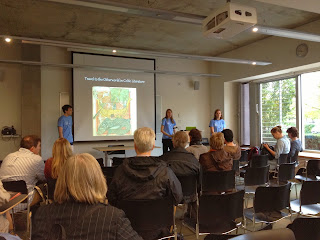 Downstairs we were happy to present two brief lectures.  The first was a discussion of the Otherworld in Celtic mythology and literature, including a dramatic retelling, in English and Welsh, of a tale from the Mabinogion, a celebrated collection of Medieval Welsh prose texts.  The second lecture was an exploration and appreciation of the importance of borders and marginalia in a selection of medieval manuscripts originating from each of the cultures covered by our research. 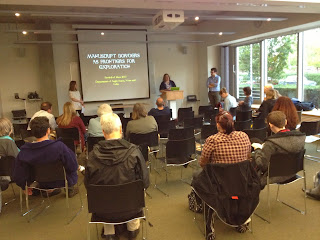 Running concurrently with the lectures was a poster session, encompassing a wide variety of topics within the fields covered by ASNC, where attendees of the Festival were welcome to browse at their leisure.  Use of the English Faculty Library’s iPad, generously loaned for the occasion, to explore high-resolution digital images of manuscripts was a popular feature of this session, and was helpful in demonstrating the increasing value of new technology in the study of medieval artifacts. 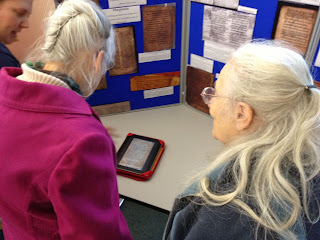 It’s not every day that we get to share our enthusiasm in our research with the general public, so we hope to see the Festival of Ideas continue to celebrate the Arts, Humanities and Social Sciences for many years to come!
Posted by Unknown at 03:25