Sir Frank Stenton was professor of history at the University of Reading, and a leading scholar of Anglo-Saxon history in the twentieth century. He is best known as the author of Anglo-Saxon England, still widely regarded as the leading survey of the subject. Stenton possessed an abiding interest in the conjunctures between Anglo-Saxon history and numismatics, and served as founding chairman of the British Academy's Sylloge of Coins of the British Isles committee (1956–66). 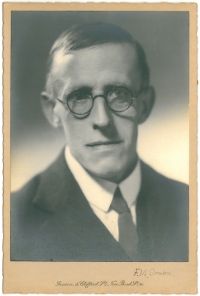 On 28 April 1958, Stenton addressed the British Numismatic Society on the points of contact between numismatics and history in the study of Anglo-Saxon England. Dr Stewart Lyon made a recording of this lecture (approximately 75 minutes in length), which has now been digitized and made available as an MP3 on the British Numismatic Society’s website. An annotated text adapted from this recording is included in a posthumous collection of Stenton’s papers, Preparatory to Anglo-Saxon England: Being the Collected Papers of Frank Merry Stenton, edited by Doris Mary Stenton (Oxford, 1970), pp. 371–82.
Posted by Anglo-Saxon, Norse, and Celtic at 02:48