The evening of Friday 26 April marked the high point and conclusion (at least of the Cambridge part) of Dr Debbie Potts' project ‘Modern Poets on Viking Poetry’. Members of the department and the public gathered in the Judith E. Wilson Drama Studio to listen to eleven pieces written by poets from a variety of backgrounds and ages. They had all been working with skaldic verses, composed between the 10th and 14th century, and translated for the project by scholars of Old Norse. Debbie Potts introduced each of the original verses, which were then beautifully read by Orri Tómasson, transporting emotion across centuries and languages (as one of the poets remarked). Some of the poems we heard were translations of, some reactions to, and some inspired by the form or content of the original skaldic verse. Especially topical was Lucy Hamiton's ‘Ring of Brodgar’, a response to a lausavísa by Þjóðólfr Arnórsson – a number of members of the department have visited this sight only ten days ago. Rebecca Perry's interesting, feminist interpretation of ‘The Waking of Angantyr’, which she entitled ‘how the earth increases’, fitted in very well with this week's CUSU Women's Campaign's ‘I need feminism because...’ photos. Anna Robinson's translation of Kormákr Ögmundarson's verses turned them into dialogue between the poet and Steingerðr, the object of his desire, now herself transformed into a subject. Probably the most emotionally charged compositions of the evening were the poems after Egill Skallagrímsson's ‘Sonatorrek’ which framed the interval. Chrissy William's ‘The Bear of the Moon’ beautifully caught the immense grief of the original, while at the same time contrasting it with dense poetic language. The film poem ‘Sonatorrek’ by Alastair Cook, featuring ‘The Lost Boy’ by John Glenday, transposed the metre and imagery of the original to the pointless deaths of World War I, commemorating Glenday's uncle who died in November 1918. It can be watched on the project's website. 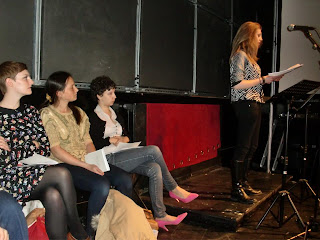 All poems were incredibly powerful and inspired pieces of art, taking a lost poetic tradition and transforming it into something new, translating it into our time while also keeping the beauty of the old. Not only did the project offer an opportunity for creative dialogue between poets and scholars. The evening also sparked several new ideas for projects among the graduate students of the department, and we hope that we will hear more of them in the coming months.
Posted by Anglo-Saxon, Norse, and Celtic at 03:50