On 29 and 30 November, St John’s College was host to a symposium organised by the Department’s own Máire Ní Mhaonaigh and Michael Clarke of NUI Galway. They brought together six scholars of medieval literature who presented their work to an eager audience of lecturers and students, from Cambridge and beyond, all under the theme of ‘Linguistic Encounters and Educational Practice in Medieval Europe’. Rosalind Love of the Department kick-started the proceedings and warmed up the audience (on what was otherwise a crisp winter’s day) with a spirited and at the same time inspiring talk on glosses and commentary in the Anglo-Saxon manuscripts of Boethius’ Consolation of Philosophy. What otherwise could be mistaken for a terse topic caught the audience’s ear with its wider implications for early medieval intellectuals’ relationship to textual authority, but also with the abundance of involuntary humour emerging from some of the glosses. Abigail Burnyeat (University of Edinburgh) provided the second act of the day, an analysis of a single manuscript (British Library Egerton 1782) in which colloquy-type texts can be read as evidence for classroom practice. Elizabeth Tyler () took advantage of the most privileged of talk slots (i.e. after the first tea-and-cookies break) to grab attention with her study of Anglo-Saxon poetic manuscripts, in which she used a comparison between the Latin Cambridge Songs (Cambridge University Library Gg 5.35) and the vernacular Exeter Book to illustrate the symposium’s general theme of multilingualism. Michael Clarke illuminated one of the lesser-known aspects of the Middle Irish Lebor Gabála Érenn (‘The Book of the Takings of Ireland’), its connections with the early medieval texts of commentary on Classical authors. His talk and Rosalind’s worked like two sides of the same coin, enabling listeners to see how the same kind of material was re-worked in a Latin and scholiastic context and in a vernacular and narrative context respectively. After a long lunch (and especially dessert), Jan Rüdiger (Goethe University, Frankfurt) and Lars Boje Mortensen (University of Southern Denmark) wrapped up the day, the former talking to us about a research project surveying the political vocabulary of medieval languages and the latter about the emergence of historiographical prose in various European literatures. 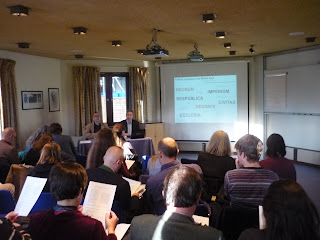 After such a full day, we came back the next morning to experience a refreshing insight into the world of Chinese textual culture of the ninth and tenth centuries offered by Imre Galambos of the University of Cambridge. Imre’s talk was a highlight, especially since he emphasised some specific aspects of the material he is working with (i.e. geographical periphery, complex multilingualism) which are highly relevant to many medievalists too and to ASNC in particular. The two-day symposium concluded with a free round-table discussion, where the various participants, particularly the PhD students and postdocs, had a chance to exchange impressions about the issues raised during the two days and about the way in which the talks provided food for thought for their own work. And food for thought they indeed provided, through the often intriguing nature of the general theme and the unusual internal cohesion of the schedule of talks. The specific focus of the research group meant that in every presentation the issue of medieval education and of its interplay (or indeed interface) with textual multilingualism was given centre stage and harmonised with the particulars of each scholar’s work. It was thus a rather rare opportunity for many students and researchers to take part in an academic conference where the celebrated ‘And now for something completely different’ could not cross their minds.
Posted by Anglo-Saxon, Norse, and Celtic at 12:42