The Department of Anglo-Saxon, Norse & Celtic is sad to announce the death on 10 March 2012 of Professor Raymond Page, Emeritus Elrington and Bosworth Professor of Anglo-Saxon in the University of Cambridge, and Fellow and former Librarian of Corpus Christi College. 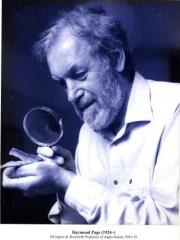 Born in 1924, Professor Page was an assistant lecturer at the University of Nottingham, where he also undertook his doctoral studies, and he came to Cambridge in the 1960s. He became Fellow and Librarian of Corpus Christi College, and was for many years Lecturer and then Reader in Old Norse language and literature in the Department of ASNC.

From 1984 until his retirement in 1991 he was Elrington and Bosworth Professor of Anglo-Saxon. He will be fondly remembered by many for his teaching of Old Norse and of Scandinavian history in the Viking Age, and as the ‘silver-haired librarian’ of Corpus. His funeral will take place in the chapel of Corpus Christi College on Thursday 22 March at 2 p.m.
Posted by Anglo-Saxon, Norse, and Celtic at 03:38