Dr Roy Flechner writes:
On Friday and Saturday 23 - 24 September 2011, the Department of Anglo-Saxon, Norse and Celtic (University of Cambridge) hosted a two-day interdisciplinary conference on conversion to Christianity in North West Europe. It featured papers by an international group of historians, archaeologists and philologists, who were given a unique forum in which to explore conversion comparatively by focusing on different parts of Britain, Ireland, Scandinavia and Iceland in the early and central middle ages. The combination of places chosen for the discussion reflects our wish to establish a wide comparative framework, covering areas that are of significance to the study of conversion in both the pre-Viking and the Viking era. The talks were recorded and audio podcasts will be posted online soon. 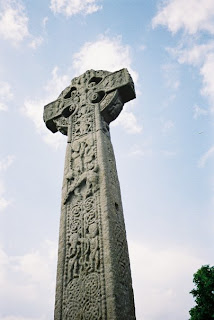 high cross, Drumcliffe, Co. Sligo
(photo by Dr Elizabeth Boyle)
The format of the conference was unique in that speakers were asked to deliver talks in sessions with prescribed titles, for instance 'Perceptions of Pagan and Christian', 'Conversion Processes', or 'Ritual'. Each session comprised two speakers, who represented either distinct disciplines, or who work on different parts of the Insular world. The idea behind this format was to encourage dialogue across geographical and disciplinary boundaries, and by so doing to expand the academic discourse on conversion to Christianity and make it more inclusive. The success of the conference has made us confident that an even wider inclusive framework -- encompassing Western Europe as a whole -- is something to strive for. Sixty-three delegates registered for the conference, comprising an even mix of established academics and students. Attendence was not confined to Britain: delegates also arrived from Ireland, Germany and the United States. Since the conference's central objective was to foster a genuine constructive dialogue between academics who study conversion, much time was devoted to discussion after the talks, and the conference concluded with a very energetic round table discussion attended by approximately thirty people. Participants at the discussion were given a chance to develop topics that were raised by the speakers, and explore them in depth, but also informally. In addition, ideas for future collaboration between scholars were aired, and are now being pursued.
We are grateful to the Raymond and Beverly Sackler Conference Series Fund, the Newton Trust, and the Department of Anglo-Saxon, Norse and Celtic, for their generous financial support that enabled this conference to proceed.
The Festschrift for Thomas Charles-Edwards was also launched as part of this event.
Posted by Anglo-Saxon, Norse, and Celtic at 06:35