Peter’s Pence and Beyond: Monetary Links between Anglo-Saxon England and Rome

Despite being separated by a thousand miles of sea, land and mountain, Anglo-Saxon England enjoyed a close connection with Rome: seat of the papacy and a leading beacon of spiritual and cultural authority in early medieval Europe. This special relationship went back to the first mission of St Augustine to the English in 597, sent at the behest of Pope Gregory I (590–604), but persisted in the centuries that followed as English kings, clergy, pilgrims and traders made frequent trips to the eternal city. Many kinds of evidence survive to show how large Rome loomed in the minds of early medieval Englishmen and women. One particularly vivid source for both their piety and their economic interests comes in the form of money brought from England to Rome in the Anglo-Saxon period. Written records show that such gifts were taking place as early as the eighth century, though by the tenth century they had assumed the more or less regular form of Peter’s Pence: a penny donated by every Anglo-Saxon household to St Peter at Rome. 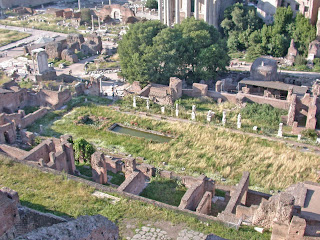 House of the Vestal Virgins in the Forum Romanum, where a hoard of over 800 English coins dating to the tenth century was found in 1883. [http://en.wikipedia.org/wiki/File:RomaCasaVestaliDaPalatinoOvest.JPG]
Dr Rory Naismith, a Junior Research Fellow at Clare College, and Dr Francesca Tinti, Ikerbasque Research Professor at the University of the Basque Country and an honorary research associate of ASNaC, have recently been awarded a research grant by the British Academy to look afresh at the movement of money between England and Rome at this time. In the course of 2012, they will go on research visits to Rome to re-examine material in museums and archives. Finds of English coins have been numerous in Rome, among them such famous pieces as a unique gold coin in the name of Offa, king of the Mercians (757–96), made in imitation of an Islamic gold dinar (now in the British Museum). Also, there has been a glut of major hoards from the tenth century comprising about a thousand coins in total. Indeed, English coins constitute the bulk of all those found within Rome dating to between the late eighth and late tenth centuries. These have much to tell about England’s coinage at that time, and also about the nature of links between England and Rome: they say as much about economic activity as devotion, and should be seen as the residue of trade and exchange as well as pious donations. Dr Naismith and Dr Tinti’s research will shed new light on the significance of this material for bonds – cultural, religious and monetary – tying England to Rome at a formative stage. 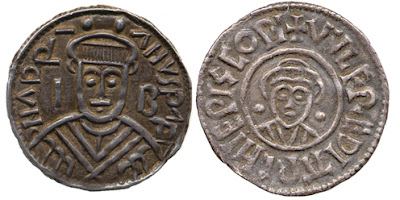 Coins of Pope Hadrian I (772–95) and Wulfred, archbishop of Canterbury (805–32), the latter drawing inspiration from Hadrian’s earlier coinage. Both coins illustrated courtesy of the Fitzwilliam Museum, Cambridge.
A parallel strand of research will involve analysing the metallic content of a selection of silver coins from the Fitzwilliam Museum minted under the authority of the popes from the 770s to the 970s. These fall during the heyday of movement of English coins to Rome, and have never before been examined in this way. Determining the purity of these coins’ silver, and the quantity of other trace elements within them, might pave the way towards some understanding of where the popes looked for models and bullion in minting their coinage. This might in turn shed some light on the fate of English silver on arrival in Rome: was it melted down to provide local currency, or were other sources of silver drawn on? What was the final chapter of movements of English coin to Rome?