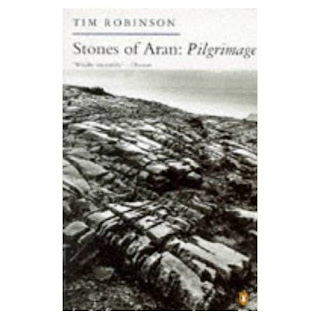 The two-week celebration of Seachtain na Gaeilge in the Department of Anglo-Saxon, Norse and Celtic opened on 9 March with a lecture by Dr. Tim Robinson, Parnell Fellow at Magdelene College for 2011, author of several books and creator of beautifully detailed maps on Aran, Connemara and the Burren. Robinson spoke on the ‘Geophanic Language of Ireland’ and led a discussion on the value of place and Irish placenames—a topic touched upon in his Parnell Lecture and developed further in this open discussion. Faculty, students and guests from various disciplines had an opportunity to examine Robinson’s detailed maps, which were passed around the large round table during the discussion. Robinson noted the importance of the lore of prominent places (dindshenchas) in medieval Irish texts; he also recounted stories about sacred places which he collected from local inhabitants while walking in remote landscapes in search of holy wells, prehistoric forts and other antiquities. The long-term consequences of the loss of place and the effects of rapid change in Ireland were also considered.

Among Tim Robinson’s many publications are Connemara: Listening to the Wind; Connemara: the Last Pool of Darkness; and Stones of Aran: Part I: Pilgrimage. He is also the subject of the recent film Tim Robinson: Connemara, directed by Pat Collins.
On 17th March the Department of Anglo-Saxon, Norse, and Celtic, and St John’s College, offered faculty, students of palaeography and visitors from various disciplines an opportunity to see the ‘Southampton Psalter’, an Irish psalm-book of ninth or tenth century date and one of the finest treasures of the Old Library of St. John’s College (more details on the Southampton Psalter can be found here). 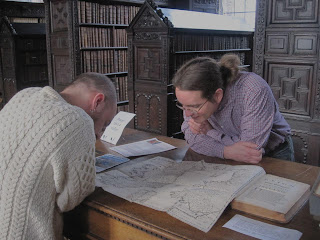 Examining a map from Cox's Hibernia Anglicana (1679) (photograph by permission of the Master and Fellows of St John's College, Cambridge)
Dr. Denis Casey, Honorary Research Associate in medieval Irish history, guided participants through the history of the manuscript and spoke on the significance of the interlinear Irish and Latin glosses in this predominantly Latin manuscript.  Dr. Casey offered insights into the bilingual culture in which the Psalter was produced and drew attention to some particularly interesting Irish glosses, including the scribe’s passing comment in his own native language: ‘it is Beltaine (Mayday) today, a Wednesday.’ Those who were present at the viewing had the pleasure of closely examining the decorated initials, interlace work and three striking illuminated images (of David and Goliath, David fighting the lion and the Crucifixion) in the intimate setting of the Old Library. The Special Collections librarian, Kathryn McKee, graciously welcomed the group and prepared a display of other texts of Irish interest from the library’s collection of rare books.  These included sketchbooks of travels in Ireland by the antiquary and astronomer, John Lee (1783-1866), a graduate of St. John’s College;  a life of St. Patrick by Richard Stanyhurst (published 1587); a map of Ireland from Richard  Cox’s Hibernia Anglicana (published in 1679), and a natural history of Ireland from 1729. 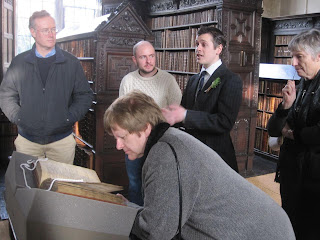 Examining the Southhampton Psalter (photograph by permission of the Master and Fellows of St John's College, Cambridge) 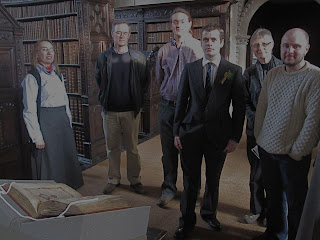 Visiting the Old Library at St John's (photograph by permission of the Master and Fellows of St John's College, Cambridge)
Posted by Anglo-Saxon, Norse, and Celtic at 06:32