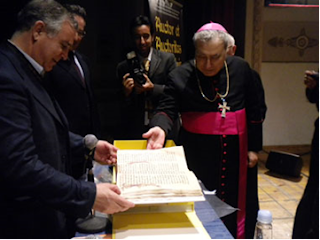 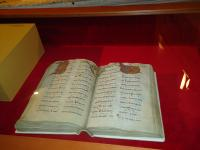 After that excitement, it was down to business for the 200 of us attending the Congress, whose theme was ‘Auctor et auctoritas’. I was there to represent a research project with which I’ve been involved since 2007, ‘Boethius in Early Medieval Europe. Commentary on The Consolation of Philosophy from the 9th to the 11th centuries’, funded for five years by the Leverhulme Trust and headed by Professor Malcolm Godden, of the , with Dr Rohini Jayatilaka as full-time researcher (see the project website). Written in about 525 as the exiled Boethius awaited execution, the Consolation is a remarkable work which is thought to have been ‘rediscovered’ in the late 8th century by Alcuin, and then steadily gained in popularity, prompting translations into Old English and Old High German, for example. Lady Philosophy’s effort to console her ‘pupil’ meant confronting BIG questions of universal interest: why evil people often seem to prosper, why bad things happen to good people, what true happiness is, how humans can have free will under the gaze of an omniscient God with a divine plan.

'Philosophia', in the tenth-century Canterbury
copy of the Consolation in Trinity College, Cambridge
Our project focuses on the nearly 80 manuscripts of the text surviving from the period up to ca. 1100. Almost all of them preserve annotation, sometimes very dense, reflecting medieval readers’ responses to every aspect of Boethius’s text, from his neo-platonic philosophy, his stories from ’s history and Classical mythology, to his quotations from Greek literature. The project aims to transcribe all of the annotation; these glosses have been studied before, but it always seemed an impossible task to assemble them all, for a complete overview of such a key text’s reception. The digital era, and a lot of hard work by my Oxford colleagues, has made it feasible, so we’re close to having all the material in hand – nearly 3000 pages of it – and are starting to edit for publication, of both the full corpus of Latin and Old English glossing and also a select version (based on one heavily-glossed copy from early 11th-century Abingdon, now in Cambridge, UL, Kk.3.21) with a translation into modern English, for a more general audience. The select edition will represent the ‘consumption’ of the Consolation in around the year 1000, when interest in it peaked.

What I tried to show at is that questions of both author and authority seem irrelevant in the case of glosses. The densest annotation suggests a steady accumulation of ideas across several periods and places, which often end up being presented all together, in many-layered glosses that read like a seminar: ‘some say it means this, other that or another thing; philosophers claim such and such, but that’s wrong because….’Another speaker in my session, Mariken Teeuwen, who led a project based at the Huygens Institute (in the Hague) on the glossing to another highly influential text, Martianus Capella’s Marriage of Philology and Mercury, made very much the same point, that glosses show scholarly authority constantly being tested and questioned. She noted that similar conclusions emerge from the recent online project on the St Gall Priscian put together by someone very familiar to , namely Pádraic Moran, now based in . Glosses take us right to the heart of the way knowledge circulated and scholarly debate was conducted in the Middle Ages: will they be analysing our marginal jottings in 3010?
Posted by Anglo-Saxon, Norse, and Celtic at 03:59