The mysterious carved symbol stones which cover Scotland north of the Forth-Clyde isthmus have always possessed a rather otherworldly quality. The people who left them – known to the Romans as the Picts, or ‘painted ones’ – disappeared from history in the tenth century, when they were effectively subsumed into the medieval kingdom of Scotland. By the twelfth century the Picts had acquired near-mythical status:

“Who will not espouse love of celestial things and dread of worldly things, if he considers not only that their kings and princes and people have perished, but also that at the same time their whole racial stock, their language and all remembrance of them have disappeared?”

The stones they erected, ornamented with elaborate swirling motifs and wild beasts, are best described as abstract. The examples with more intelligible pictures usually seem to depict conventional aspects of Dark Age aristocratic life: Christianity, hunting, warfare, land ownership and so on. But a new theory, put forward by Professor Rob Lee of Exeter University, suggests that there may be more to it than that. Lee and his team think these symbols might actually be a script, and that the stones are covered with writing. The media has pounced: “New Written Language of Ancient Scotland Discovered”, as the Discovery Channel’s website proclaims. Or “Ancient Language Mystery Deepens”, as the BBC more soberly put it. 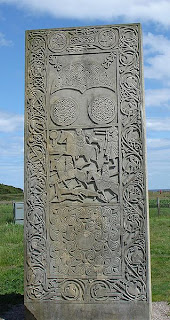 Hilton of Cadboll replica (from Wikimedia Commons)
Why the excitement? It’s mainly because the Pictish language has always been something of an enigma. Other than their stones the Picts left very little trace of themselves (there is no surviving Pictish literature, for instance). Bede, a Northumbrian scholar writing at the beginning of the eighth century, makes it quite clear that the Picts did have their own language, but modern scholars have very little to go on in their attempts to work out what it might have looked like. Place-names and the names of Pictish kings (which occasionally appear in medieval texts) suggest that it was a Brittonic language, part of the same family as Welsh. That might imply that the Picts had not always been all that different from the rest of the Brittonic-speaking inhabitants of Britain, who once stretched from Cornwall to Lothian. It may only have been with the coming of the Romans, and their famous walls, that anything became distinctively ‘Pictish’. Clearly the Welsh and Pictish languages were different by Bede’s time, perhaps because the latter had been isolated long enough for it to develop along different lines. Without a more extended sample of Pictish writing, however, there is not much more that can be said.

If the new hypothesis is correct then that may not be the end of the story, however, because the hundreds of Pictish stones would represent a huge body of linguistic evidence. Professor Lee and his colleagues wanted to work out if there is any meaningful pattern in the way the various symbols on the stones are laid out. To do so they applied a mathematical law called Shannon’s Entropy, which measures the amount of ‘randomness’ in a given data set. The formulae involved make uncomfortable viewing for most ASNCs (think Η(Χ) = Σp (χi) I (χi) and so on) but the basic aim was to work out whether certain symbols usually follow certain other symbols in a given context. There is, Lee claims, a level of predictability which hints that we are dealing with a language rather than merely with pictures. These stones, in his words, ‘communicated information’.

The jury is still out on these findings. The way Lee approached his evidence in the first place (possibly by lining the symbols up to be read as linear symbols) has already come in for criticism from at least one linguist. And at one level, of course, all pictures ‘communicate information’, hence the proverb about a thousand words. The Pictish sculptors might have been following stylistic formulae, completely lost on us today, which had nothing to do with anything linguistic. Furthermore, as someone else pointed out today, it would have been a ‘bloody hard’ language to write in. One final problem is that proof will be hard to find. Even if this is a script, we might never be able to decipher it. We would need something bilingual, and nothing remotely like that has so far turned up. A stone combining some Pictish symbols with a commentary in Latin or Old Welsh might do for the Pictish language what the Rosetta Stone did for Egyptian hieroglyphics or the Behistun inscriptions for Persian cuneiform. But don’t get your hopes up.
Posted by Anglo-Saxon, Norse, and Celtic at 11:44