On 23rd June ASNC welcomed more than sixty potential applicants and their parents to our departmental Open Day, which was held in the English Faculty Building on West Road and in the Parker Library at Corpus Christi College. Senior members of the ASNC Department gave short talks on the various papers available to our undergraduates, from Old Norse to Palaeography, Celtic Philology to Anglo-Saxon History. There were also talks on various aspects of the University's admissions process. After that, our visitors had the opportunity to see a number of Anglo-Saxon and medieval Welsh manuscripts at the Parker Library, including the Corpus Glossary (an early ninth-century manuscript containing a glossary in Latin and Old English, which provides some of the earliest evidence for the Old English language), the Anglo-Saxon Chronicle, and a Latin copy of the medieval Welsh law texts known as Cyfraith Hywel. 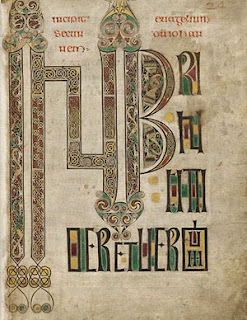 CCCC MS 197B, an eighth-century gospelbook (image from http://parkerweb.stanford.edu)
In addition to our departmental Open Day, we also had a stand in the Law Faculty at the main University Open Days (on 1st and 2nd July), and over the course of those two days dozens more potential applicants dropped in to the Department to find out about what we do. We hope that many of the people who visited us over the course of the Open Days will be joining the Department as new undergraduates in October 2011.
Posted by Anglo-Saxon, Norse, and Celtic at 02:01