This week Cambridge has been a hive of Irish-related activity. Events began on Monday with a seminar given to the Medieval Archaeology group at the McDonald Institute by Dr Kieran O'Connor, of the National University of Ireland Galway, on élite Gaelic settlements in Ireland in the high Middle Ages. This was followed by the Kathleen Hughes Memorial Lecture, organised by the Department of Anglo-Saxon, Norse & Celtic in assocation with Hughes Hall, which this year was given by Prof. Marie-Therese Flanagan of Queen's University, Belfast. Prof. Flanagan spoke on the twelfth-century ecclesiastical reform movement in Ireland, highlighting Ireland's manifold connections with England and continental Europe during the eleventh and twelfth centuries. Prof. Flanagan noted the poor survival rate of sources from Ireland itself at this time, and pointed out that the very good survival rate of evidence from centres such as Canterbury may lead us to overestimate the importance of that Metropolitan See for the ecclesiastical reform movement, in comparison with other potentially significant centres, such as the Regensburg Schottenkloster, from which fewer sources survive.

One of the few reform documents to have survived from Ireland is Gille (Gilbert) of Limerick's De statu ecclesiae, one copy of which survives in a Durham manuscript, and the other surviving copy of which is now preserved in Cambridge University Library and Corpus Christi College, Cambridge. Prof. Flanagan spoke in detail about Gille's tract, identifying a number of its sources and their links to the Continental reform movement, and she also highlighted Gille's emphasis on reform at the parish level, and his focus on priests and on women. 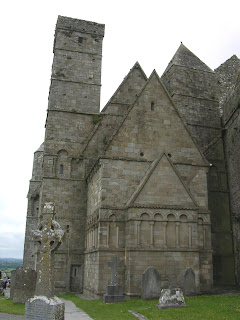 Cormac's Chapel, Cashel - the architectural embodiment of ecclesiastical reform in Ireland
On the same occasion as Prof. Flanagan's erudite lecture, the Department of Anglo-Saxon, Norse & Celtic also celebrated the publication of last year's Kathleen Hughes Memorial Lecture, given by Dr Colmán Etchingham, National University of Ireland Maynooth, entitled The Irish 'Monastic Town': Is this a Valid Concept?  The lecture is available from our Departmental Secretary for a modest sum, and its publication was launched by our Head of Department, Dr Máire Ní Mhaonaigh, in the presence of the cultural attaché of the Irish Embassy in London, Mr Ciaran Byrne.
As if this was not enough, Monday's events were followed by a fascinating seminar as part of the Cambridge Group for Irish Studies series, which meets regularly at Magdalene College under the direction of Prof. Eamon Duffy. At this most recent seminar, Dr Meidhbhín Ní Úrdail, of University College Dublin, spoke about the prolific scribal culture which existed in eighteenth- and nineteenth-century Ireland. Indeed, aside from Iceland, one would be hard-pressed to think of another region in which scribal culture enjoyed such vibrant and creative life so late into the modern age. Dr Ní Úrdail's paper focused in particular on one text ('The Battle of Clontarf') which exists in almost ninety different modern manuscript copies, and she demonstrated the creative engagement of the scribes who copied the text, resulting in virtually every manuscript copy of the text containing textual variants to a greater or lesser degree (thus rendering her task, as editor of the text, that much more difficult!).
Our Irish week continued with Dr Deborah Hayden, Lecturer in Modern Irish in the Department, giving a seminar on 'Poetic Law and the Medieval Irish Linguist' at Hughes Hall on Wednesday, and that is followed today by Dr Denis Casey, who will be giving a Research Seminar to ASNC on his work towards a new critical edition of the 'Annals of Clonmacnoise'. It has been an exhausting but intellectually stimulating and immensely rich week, and is testimony to the strength and diversity of medieval Irish studies in Cambridge.
Posted by Anglo-Saxon, Norse, and Celtic at 08:22