Croch Saithir: envisioning Christ on the Cross in the early medieval west

Last week I was in Cork for a two-day conference on 'envisioning Christ on the Cross in the early medieval west'. This was organised as part of a wider research project, currently ongoing at UCC, to explore Christ's Passion as it was understood, depicted, and re-created in early medieval literature, art and liturgical practice. The project has a particular focus on Ireland, in its European context. This was brought out fully at the conference, where it was shown that - contrary to popular misconceptions about the nature of medieval Irish Christianity - developments in Ireland were very much in tune with those elsewhere in Europe. Art historians from Italy, Spain and Germany gave very interesting papers on crucifixion iconography, while liturgists spoke about the role of the narrative of the Passion within the daily rhythms of the Church, particularly in relation to the Eucharist. However, in the interests of brevity I shall focus on the papers of relevance to all things Anglo-Saxon, Norse & Celtic. 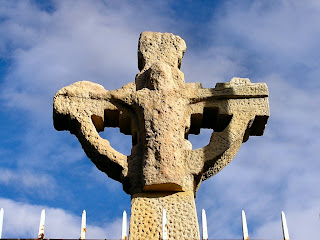 'Christ on the Cross', Roscrea, Co. Tipperary, 12th cent.
(from www.highcrosses.org)
The conference opened with a plenary lecture from Jennifer O'Reilly, who spoke on 'The mystery of the cross and the identity of Christ', which was a tour de force of art historical and textual scholarship, focusing on the earliest representations of the Crucifixion in Insular manuscripts. Also of note was Salvador Ryan's fascinating paper on depictions of the Crucifixion in later medieval Gaelic bardic poetry, and Juliet Mullins' re-assessment of the 'Passions and Homilies' in the Leabhar Breac, a fifteenth-century Irish religious miscellany. Carol Neuman de Vegvar re-visited the Blytheburgh Tablet, examining its possible function as a liturgical diptych, and Amy Miller, a doctoral student at Toronto, argued that the Gosforth Crucifixion, an inscribed stone preserved in Cumbria, should be read not as a Christian monument at all, but rather as a Pagan imitation of Christian artistic forms - I expect that the Christian/non-Christian interpretations of the Gosforth sculptural corpus constitute part of a debate that will continue to rage, but Ms Miller made some interesting points regarding whether or not an overtly Christian symbol, such as a cross, would always have been seen by its audience in fully Christian terms. Richard Hawtree's paper on Eriugena's Carmina for Charles the Bald was an excellent reminder that medieval Ireland's greatest philosopher was also a significant poet, whose poetic works deserve wider attention, and Jenifer Ní Ghrádaigh's assessment of Crucifixion iconography on Irish Romanesque sculpture raised significant questions about the relationships between episcopal and royal authority in Ireland during the time of the ecclesiastical reform movement of the late eleventh and early twelfth centuries.
All in all, it was a great event, with an extremely high standard of papers. Most significantly, the conference demonstrated Ireland's engagement with, and contributions to, the mainstream of European cultural and artistic trends, as manifested in medieval Christianity's devotion to Christ's suffering on the Cross.
Posted by Anglo-Saxon, Norse, and Celtic at 05:52